Recently I received an email from Ian B of the Hawkes Bay who had been sorting through his deceased grandfather’s effects and among them found an unofficial identity disc (“dog-tag”) which appears to have been made about 1916 from an Egyptian (Ottoman) 10 Qirsh coin.  One side had been smoothed and stamped with: NZ FORCES  11/313  P (for Presbyterian)  G.H. MCDERMID  W.M.R.  M.G.S.   The dog-tag was attached to a length of brown parcel string onto which were also threaded three small transparent beads/rings, one turquoise and two amber – known as faience beads.  Faience was made by grinding quartz or sand crystals together with various amounts of sodium, potassium, calcium, magnesium, and copper oxide. The resulting substance was formed into whatever shape was desired, whether an amulet, beads, a broach or a figurine and then said pieces were heated. During heating, the pieces would harden and develop a bright color which was then finely glazed.  It is thought that the Egyptian artisans perfected faience in an attempt to imitate turquoise and other hard to find gem stones.  Faience beads often featured in funeral jewellery and were frequently buried with mummies.  If genuine, my research indicates these beads were prevalent from around the Bronze Age onwards and so could be up to 3000 years old!  I suspected however they were mass produced reproductions of which thousands had been hawked to the tourist soldiers as ‘genuine’ souvenirs. 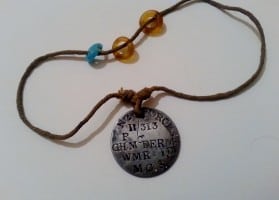 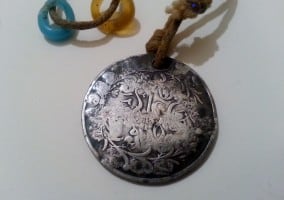 George Henry McDermid was not a name that Ian or any of his family recognised in connection with their own lineage and so he contacted MRNZ for help.

11/313 Trooper George Henry McDERMID was born in 1890 at Akitio in the Tararua area.  A labourer living in Weber, George had enlisted into the Wellington Mounted Rifles (WMR) at Dannevirke in August 1914, embarked for Egypt in October, served on Gallipoli from Aug-Dec 1915 as a member of the WMR Machine Gun Section (MGS).  After a series of serious illnesses George was invalided back to NZ in August 1916 and discharged in September 1916 being “no longer fit for active service”.

George successfully re-enlisted again in 1917 for the 35th Reinforcements.  Age and fitness standards by then had been relaxed due to the dwindling numbers of available men to send overseas however he was not mobilised.  As a consequence, the McDermids moved from Wellington to Plimmerton where George started a boot repair business.

With the onset of  WW2 in 1939, George’s age precluded his serving overseas but he was useful to 2NZEF in a Home Service role.   In 1942 George, Joyce and their family – Agnes Gwendolyn, George Vivian and Robert Graham – moved  to the Christchurch suburb of Spreydon.  It was here that George died on Valentines Day )(February 14th) 1957.

From here it was an easy resolution to start the search for Christchurch McDermid descendants since only two names of their particular spelling were listed in the phone book – Robert Graham McDermid and his son Graham.   I telephoned Robert who confirmed that he was now the sole surviving child of George and Joyce McDermid.  Living only a few kilometers from me in Mairehau, I was very pleased to be able to deliver his father’s WW1 dog-tag in person.  As the family’s historian, Robert has amassed an impressive amount of family history material, and tributes to his father’s military service.  Needless to say he was delighted to receive such a personal possession of his father’s back into the family after almost 100 years.

Many thanks to Ian B. for making this return possible.

Footnote:  Ian’s grandfather served with the 8th Reinforcements of the Otago Infantry Battalion which embarked for Egypt in Nov 1915.  There is every possibility that George McDermid and Ian’s grandfather could have met or even been mates during their time in Egypt, particularly after George’s returned from Gallipoli.  Both were also carpenters whose skills no doubt were in high demand, but just how George’s dog-tag came to be in the possessions of Ian’s grandfather is likely to remain an unsolved mystery.