Searching for my great–grandfather’s medals …

~ a young Kiwi in Australia enlists for the great adventure ~

News from the Front

On November 11th, 1916 an infamous pink telegram from the NZ Post & Telegraph Service arrived at 16 Lees Street in Dunedin, the home of John and  Margaret Sullivan.  The telegram carried the news that all parents who had sons of military enlistment age dreaded … the Great War, the ‘war to end all wars’ had claimed the life of their beloved and only son.  5137 Private Jack* Sullivan, an infantry soldier serving with the 56th (Inf) Battalion, 1st AIF, had been killed in northern France on the 9th of October, 1916 – Jack was 24 years old.

* Jack was the name Private Sullivan enlisted under.  He had abandoned the ‘John Ormsby’ names possibly because he was usually known as Jack rather than John, but more particularly to differentiate him from his father, John Snr.  His forenames had also caused some confusion when the ‘Ormsby’ initial was inadvertently linked to ‘Sullivan’ thereby incorrectly listing him as an ‘O’Sullivan’ … or was there another reason?  Over 4,000 AIF soldiers enlisted under false names for a variety of reasons.  Some name variations were the result of administrative errors however many were also by design to conceal a man’s identity from an event or circumstances in their past, as may have been the case with Jack!

A family in mourning

In due course Jack’s few meagre possessions retrieved from what was left of the billet, were posted home to his parents in 1917.  It would be 1921 before they received any formal acknowledgement of Jack’s sacrifice on behalf of the King and a grateful Nation – a Memorial Plaque in a plain brown, waxed cardboard envelope (also called a Death Plaque, Death Penny or Dead Man’s Penny) which was accompanied by a Memorial Scroll with Jack’s name inked in red, a form letter of condolence from the King thanking Jack for his devotion and sacrifice and a photograph of his grave.  Between 1920 and 1923 the family also received at varying intervals, three service medals – the 1914-15 Star, British War Medal 1914-18 and the Victory Medal.  These posthumous mementos represented the sum total of Jack’s life, his service and the Supreme Price he paid.

In 2010 while studying some old family documents, I stumbled across evidence of my maternal great-grandfather, a man our family had never known existed. The birth of my mother’s mother was the cause of Jack Sullivan’s departure from Dunedin to Melbourne, a fact my mother only apprised me of just prior to her death in 1999.   My internet research took me to the National Archives of Australia and the Australian War Museum.  From this and the public records for Dunedin, I was soon able to confirm that 5137 Private Jack (John Ormsby) Sullivan was indeed the man.  Enthused by this discovery, further research led me to the conclusion that 18 year old Jack, a Dunedin theatre pianist, had ‘done a runner’ to Australia just after the birth of a daughter in early 1913, apparently to avoid a pending paternity claim.  I was unable to determine who the child’s mother was.

On October 24th,  1914 Jack Sullivan fronted up to the Broadmeadows Camp in Melbourne and volunteered for service in the Australian Imperial Force (A.I.F).  He was assigned to the 12th Company, Australian Army Service Corps, 3rd Australian Light Horse Brigade Train and embarked for England in February 1915.  He very soon learned his ‘great adventure’ would not be taking him to Europe to fight the Hun, but to Egypt and subsequently Gallipoli to fight the Ottomans of Turkey who had just entered the war as an ally of Germany.

From May to December 1915 Jack had managed to survive the Gallipoli campaign.  After the evacuation he was transferred from a mounted role to an Infantry unit, the 56th Battalion known as the ‘Half Hundredweights’ and sent to France.   Many of the A.I.F’s mounted units were disbanded at this time since they were totally unsuited to the trench warfare that characterised operations on the European Front.  The dismounted troops however had gained valuable experienced at Gallipoli and so had been selected to boost the numbers of reinforcements and act as mentors and trainers to the ‘green’ new arrivals from  Australia.

The 9th of October, 1916 was a day that was to become etched in the minds of Jack’s parents, John and Margaret Sullivan and sisters, for evermore.  The 56th Battalion’s War Diary recorded only two deaths on this day.  The Court of Inquiry convened to investigate the circumstances concluded that at approximately 11.30 hours, an artillery shell (of unknown origin) obliterated Private Jack Sullivan’s billet in the French village of Fleurbaix – Jack was inside and severely wounded; he died within hours.  The second death was attributed to an unfortunate male villager who coincidentally was passing Jack’s billet when it was struck.

Whatever happened to Jack’s medals ? 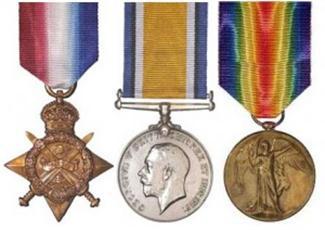 My continued research of the family structure confirmed that I was now the sole surviving direct descendant of Jack Sullivan – his great-grandson.  On learning this my immediate thoughts were:  where was he buried … and what had happened to his medals?  It was another two years of research before I could finally conclude that Jack’s father (John Sullivan,  Snr) had almost certainly sold his son’s medals in the early 1930s.  The family I learned, had become financially destitute during the the Great Depression that gripped New Zealand and the rest of the world following the Wall Street Crash of 1929.  No other official item that commemorated Jack’s death and sent to his parents in the 1920s appeared to have survived the passage of time.

Determined to try an locate something of jack’s memorabilia, I started to scour New Zealand and Australia, making inquiries far and wide to try and find Jack’s medal trio (1914/15 Star, British War Medal 1914-1918 and Victory Medal), his Memorial Plaque and Memorial Scroll or any other item that acknowledged, or was connected with, his service or death.  Regrettably nothing thus far but I remain ever hopeful something will eventually turn up.

Medals and memories – For Sale?

While searching for Jack’s medals, I never ceased to be amazed (and somewhat saddened) by the number of medals named to New Zealanders that I came across no longer in the care of families.  Large numbers of medals were also regularly traded on the internet locally and internationally by individuals, collectors, dealers and auction houses.

Medals are very saleable items and keenly sought after by collectors world-wide.  It is also a known fact that many medals in years past were sold by cash strapped Veterans, and families faced with the similar financial hardships as Jack’s parents had been confronted with by the Depression.  Others medals were simply ignored, lost, given away and even disposed of by grief stricken parents who did not want to be reminded of the loss of their loved one.

Unfortunately once medals have left family ownership or custody, they are extremely hard to recover as they are quickly snapped up by collectors.   The sale or disposal of family medals denies future families of these historic mementos as well as the opportunity of honouring their ancestor Veterans by wearing their medals.  Once medals are lost to a family, if their are no other visible reminders (photographs etc) of the person, it is very likely in a relatively short space of time the Veteran will join the ever swelling ranks of the forgotten and anonymous.

The quality of life that we as free New Zealand citizens enjoy every day is due in no small part to the efforts of our war veteran forefathers.  We, the beneficiaries of their service and sacrifices, owe them all a perpetual debt of gratitude which should never be forgotten.  Families and descendants can go some way to re-paying this debt by:  Honouring their memory of on the National Days of Remembrance by wearing their medals with pride;  Educating the young in the protocols of honour and respect on occasions of Remembrance;  Inform them of the deeds and sacrifices of their ancestor Veterans, and instil in them the importance of safeguarding and treating with respect the Veteran’s taonga – their medals.

It is my belief the rightful place of any war or service medal is with a Veteran’s descendant kin.  Families who care for their ancestor’s medals do so out of respect and to honour their memory, however many more Veterans are largely forgotten or unknown to which the numerous medals traded on the internet attest to.  Medals Reunited New Zealand© was established to return medals that had been found (and donated) and to trace the recipient’s descendant kin to return them to.  Through these medals we hope that a longer term aim will be realised, of ensuring the memory of the forgotten and anonymous will be made known to their descendants and so remembered by future generations.

~ A Nations’ Debt of Gratitude ~

Be ever thankful for the sacrifices of others;
We dare not forget we are the heirs of their honour,
their courageous deeds, and unfulfilled dreams.

‘Rescue and Retreat’ courtesy of the artist Jennifer Marshall, 2008.

Ben Kemp is The SEO Guy, the designer and IT Manager of the Medals Reunited New Zealand© website.  Launched in 2014, Kiwi IT guru Ben offered to build the site at a reduced rate in support of MRNZ’s work reuniting medals with families; Ben’s  father was a Returned War Veteran.

Kelvin Youngs is the Webmaster of the UK based AircrewRemembered.com site and provides valuable assistance to MRNZ when researching the medals and service history of airmen who died on air operations.  Medals Reunited New Zealand© highly recommends to any family who has an airman ancestor that died during flying operations in war or peace, to contact AircrewRemembered.com and advise them of your airman’s name.  AircrewRemembered.com will research and create a detailed Tribute Page to the flyer (and crew) by summarising the action in which your airman lost his life.  Photographs are welcomed, their service is FREE.