Eagle-eyed former British Army and NZ Territorial Force soldier Ann Stafford is a volunteer at the Nelson SPCA Op Shop.  When she spotted a NZDF medal case among a pile of donated goods a few weeks ago, she convinced her supervisor it should be returned to the owner rather than sold.  Problem?: the donated clothing and goods was made anonymously in so much as whomever dropped of the bundle of clothing and goods at the shop, did not give or leave a name (nor was it asked for, as is the norm when goods are donated).  Often such bundles or larger items are dumped at the door when the shop is closed.  Ann recognised the medal case immediately as it was identical to her own that she had received for her service in the NZ Army.  Ann was also aware of MRNZ’s work in reuniting medals that had been found, having recently visited us to have her own medals mounted by MRNZ colleague, Brian Ramsay to whom she mentioned the op shop find.

The medal, a NZ Defence Service Medal (NZ DSM) with clasp NATIONAL SERVICE, was introduced into the NZDF in 2011.  Three years of attested, full-time or accumulated Regular, Territorial, C.M.T., or National Service is the qualifying criteria for any service person who has served since 3 September 1945.

The full-size medal Ann had bought to us was correctly named with the recipient’s military description: 787536  PTE  DMF  LINES  RNZIR.  The medals in a pristine case of issue, was complete with miniature medal and two NZDF instruction cards.  Also accompanying the case was a letter of explanation addressed to “DMF Lines” which by its date showed that David Lines had received the medals in 2012.  A NZDF medal receipt proforma to affirm the medals had been received by the recipient remained unsigned, a detail Craig will now complete on his Dad’s behalf.

In November 1959 the new Labour Government had replaced the Military Training Act 1909, with the National Service Registration Act 1958.  The Act required all 19+ year old males to register for military training and intakes would be drawn once a month by ballot.  The first National Service intake started training in early 1959.  In 1965 David Lines was balloted to attend compulsory military training in June of that year.

787536 Private David Malcolm Frank Lines, RNZIR was 21 years old when his intake started training on 5 June 1965 at Burnham Military Camp.  After the initial 14 weeks of Army indoctrination training had been  complete, each soldier had continued legal obligation to attend a set number of training weekends throughout the year which culminated in their attendance at an annual field camp at the end of each year.  This obligation lasted for a period of three years.  Pte. Lines completed his obligation and was subsequent discharge from any further commitment on 2 September 1968.

The Lines family has had a long history in the Nelson-Tasman region since the arrival of their ancestor Thomas Lines aboard the “Thomas Harrison,” the first sailing ship to arrive in Nelson on 25 October 1842.  It was Thomas Lines who is credited with introducing hops into New Zealand.  Thomas married Anne BLACKWELL in Richmond, Tasman which started the New Zealand ancestral line that continues in Nelson-Tasman to the present day.

The search for a descendant of David Lines started with a the letter from the NZDF’s Personnel Archives and Medals office that accompanied the medal.  It was dated 2012 and had been addressed to David Lines at a Nelson address !

What it didn’t tell me however was what, when and where David Lines had worked and lived up until 2012.  Such information would normally give me some direction as to where in the country I should start to look for these specifics about an individual.  It would also be essential for me to be able to write any sort of an outline of his life should we be successful i reuniting his medal with family.  I began gathering isolated ‘dots’ of information about David:

Whilst far from complete, by joining these ‘dots’ together I was able to gain an overall impression and assemble an outline of David’s life. 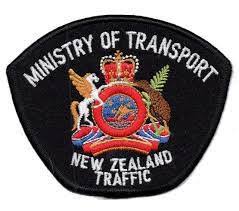 David Lines had been born in Wai-iti, 24 km south of Nelson, on 11 Oct 1943.  He was educated at Nelson College, 1956-1958.  After he completed his 14 weeks National Service training at Burnham in 1965, he returned to Wai-iti and continued to meet his National Service obligations until fully discharged from theis in Sep 1968.  About eight months after his initial National Service training period, David became engaged to be married in Nov 1965.  One year later he married Wakefield born Janet Louise LAWRENCE (b1946).

The disciplined army training National Service had hammered into him must have resonated with David because he chose to join a uniformed enforcement service as a Traffic Officer.  At this time Traffic Officers were part of a multi-purpose government department known as the Ministry of Transport (MOT), unlike the present MOT that was re-created in 1968.  The MOT comprised the Traffic Control and Enforcement officers, the Marine Dept, Civil Aviation Dept, and Meteorological Services.  Eventually the traffic officers would be split away from the MOT and amalgamated with the NZ Police in 1992.

Following David’s training at the MOT’s Traffic Officers’ School in Trentham, Upper Hutt, the Lines were posted to Winton in the heart of Southland, circa 1968.  Their first son, Craig John, was born in 1969 followed by his brother, Bruce Leonard in 1971.  By 1972 the family had been transferred to Wellington and were living in Naenae, Lower Hutt.  After 10 years with the MOT, David Lines finished with the department in 1976-77.  He spent a couple of years driving a Taxi in the Wellington area before moving the family to Rata, near Marton in the Manawatu where he took on unspecified agricultural work. 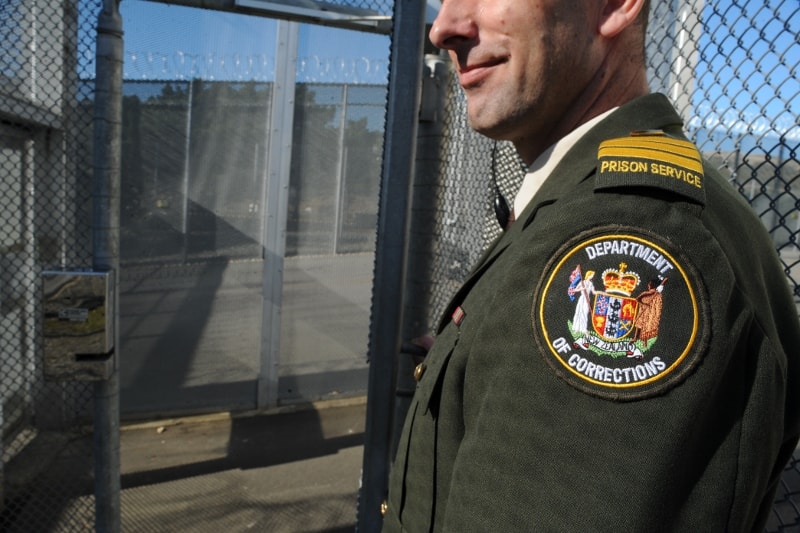 About 1980, David started a second career as a Prison Officer with the NZ Prison Service.  David and Janet were posted to the central North Island, to the minimum security Tongariro-Rangipo (formerly Hautu) Prison in Turangi.  Regrettably the couple separated during this time which has led to gaps in Craig and his brother’s knowledge of their father’s employment and movements (and this story) over the following ten or so years.  Janet and the boys returned to Wakefield at this time; David later re-married.

With only 14 families of Lines in the phone directory I started at the top calling each one.  After striking out with 11 of them, with the twelfth I found a winner.  Peter and Marlene Lines live at Wai-iti (surprising!).  Thanks to Marlene (whom I spoke with) she was able to confirm I was on the right track and that her husband Peter was an uncle of Craig Lines and his brother Bruce, Craig being the eldest son of David and Janet Lines.  Craig is a Nelson businessman who specialise in manufacturing boutique beers and spirits.  Fortunately Marlene was also able to advise me where I might find Craig. 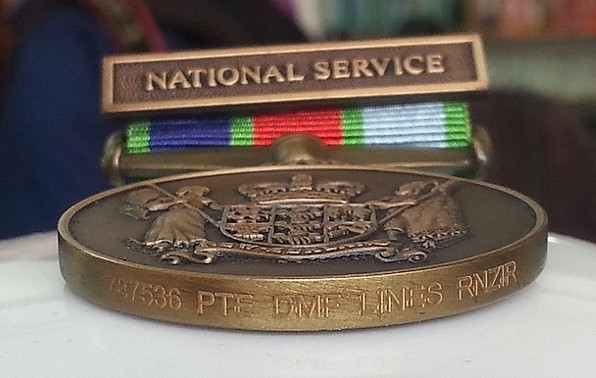 After surprising Craig at work with the news of his father’s medal, a meeting was arranged at the SPCA shop on Monday, April 8th together with Ann and myself (and Nelson Mail reporter Tim & photographer Braden) where Ann was able to personally hand over David Line’s medals to Craig.

Special thanks to Ann for her quick thinking in rescuing the medal case.

The reunited medal tally is now 253.

Note: the identity of the donor of items deposited at the SPCA store along with David Lines’s medals remains a mystery?