An email from Australian colleague, Glyn of Lost Medals Australia, has resulted in the return of a medal to a former serviceman within 24hrs of its loss being investigated.  I received a request for assistance in tracing a former RNZAF airman whose NZ Defence Force Service Medal, minus its packaging, had recently been found by Australia Post staff.  The medal in its original box was named to Y83167 LAC JD Stewart, RNZAF.

The name and initials immediately rang a bell with me as a possible airman I had served with as a Flight Sergeant Senior Telecommunications Operator in the 1970-80s.  His service number and rank were about right for that era of service so I contacted Personnel Archives & Medals at HQ NZDF. Next day Logan M confirmed my thoughts and that the medal had been sent to John in September 2015.  I advised Glyn of these findings and within the hour, courtesy of Logan, a very surprised John Stewart was on the phone to me from Sydney Airport as he was, coincidentally, about to board an aircraft to NZ.  I related the circumstances regarding the finding of his medal after which a very happy (and relieved) John was able to contact Glyn to arrange for the return of his medal as soon as he returns to Australia.

It will indeed be an unexpected pleasure to catch up with John in person at the end of this week after a gap in our contact of some 30 years !  My grateful thanks to Logan for his prompt action and to Glyn for yet again, reinforcing the value of our trusted Anzac connection.   Glyn’s post on his story can be viewed here:   http://lostmedalsaustralia.blogspot.com.au/2015/11/modern-new-zealand-medal.html 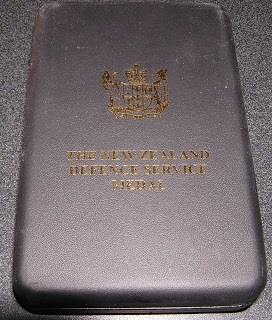 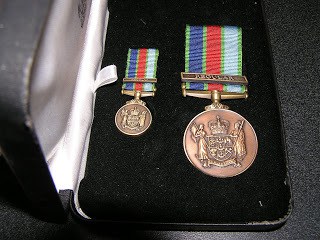 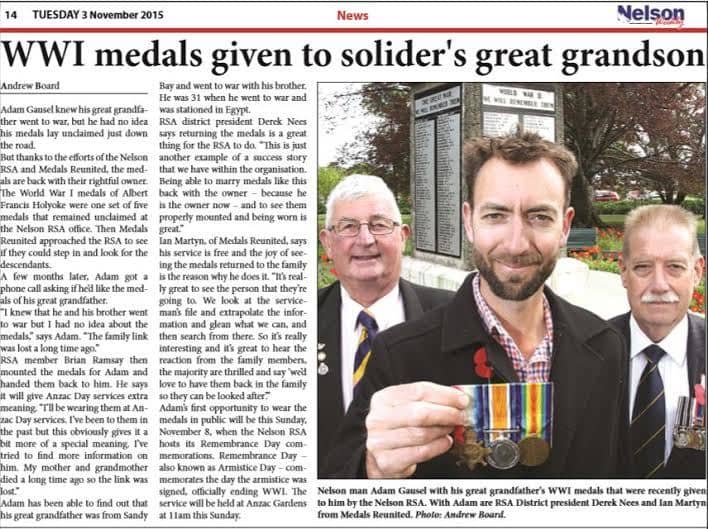