The British War Medal and Victory Medal named to 8/3467 RFLM William Henry ANDREWS were acquired by MRNZ from a deceased estate with a view to reuniting them with descendant family.

When I started the research to find an Andrews descendant the trail was initially somewhat confusing.  William Henry Andrews’ military record stated that he had been  had been born in Geraldine, enlisted into the Otago Regiment, his N/K (next of kin) was a friend – W. King of Geraldine, he was working for Mr AB Knight in Dannevirke, Wairarapa at the time of enlistment, and William had also been known as Henry Annals !

Entries in William’s file after his death also clouded the identity issue with written comments such as: “No known relatives” and “W. King – address unknown; not found Jan 1917” and “all attempts made to trace relatives and name of N/K have been fruitless.  P.T (Public Trust) has been tasked to administer the estate”, and, “No evidence of a will” ….. unfortunately no help to me at all.

After looking into the first few Electoral Roll records to locate a William Andrews it was obvious that I was not going to make any connection between William and an “Andrews” family that fitted with his military record. The reason for the confusion soon became apparent.  Another faded hand entry on William’s file stated “No N/K on file. File searched again 10-6-18”., and another, “Identical with Annals, Henry”, and lastly “Mr James Annals (F) c/o Mrs S. Gale, Pleasant Valley Geraldine”.  This information now focused my research on the name Henry Annals.

With this information I was able, with Julie’s help, to establish through Cenotaph, Electoral Roll records and the South Canterbury History website, that Henry had three brothers and five sisters, most of whom had spent their lives in and around the Geraldine/Temuka/Timaru areas of mid-Canterbury.

Henry (Harry as he was known) Annals had indeed been born on the same date and in the same location that was cited on William Henry Andrews’ file, and both appeared to be the eldest son of James Annals and Sarah Jane, nee Evans, of Wai-api, Temuka.  Collectively, all of these facts led me to conclude without doubt that William Andrews and Henry Annals were one in the same person.

William Henry Andrews (I will use “Harry” from here on to avoid confusion) was the eldest of the four Annals brothers; the Annals family also had five sisters.

Harry was the first of the Annals brothers to voluntarily enlist for WW1 service.  At nearly 33 years of age and working as a farmer on a property in Dannevirke, Henry gave his address as the “Fearnley Coffee Palace” when he went to enlist at Palmerston North in late 1915.  Why he was not working on the family farm with his other brothers and father is unknown.

Why Harry enlisted under this assumed name and not “Henry Annals” can only be speculated at however, two possible reasons have surfaced.  The first relates to a newspaper report I found during this research that cited one “Henry Annals” as being charged and fined along with a publican and number of others, for gambling in a hotel premises after hours.  Harry may have thought this could have precluded him enlisting and so changed his name.  Oddly enough the Electoral Roll showed Harry to be living in close proximity to a William Andrews, a farmer from Pahiatua who also farmed in the Dannevirke area (43 kms from Pahiatua).

The second possible reason could have hinged around the fact that Harry (single) may have wished to accompany his brothers overseas but would require his father’s authorization to enlist.  In order to accompany brothers Walter [and later Frederick], both of whom had already volunteered for service, Harry could avoid the need for his father’s permission by changing his name and claiming to have no other family (he had already asked a friend in Geraldine to act as his next of kin)?  We will probably never know the real reason now.

8/3467 Rifleman William Henry Andrews embarked with the 9th Reinforcements of the Otago Infantry Regiment, for Egypt and France in January 1916.

Harry’s brother 7/1942 Tpr. Walter Annals, 9th Reinforcements, Canterbury Mounted Rifles was the second of the Annals boys to embark for service, also in January 1916.  Walter was fortunate to return home safely and later had WW2 service.  5/10/99 Pte. Walter Annals re-enlisted in 1939 for Home Service however he was age restricted from serving overseas.

The remaining Annals brother 47299 Pte. George Annals, 26th Reinforcements, Canterbury Infantry Regiment was embarked for Egypt in June 1917, was Wounded In Action (WIA) in France, and repatriated to New Zealand after hospitalization in England.

After working my way through the Annals family lineage I concluded Walter and Martha Annals’ family to be the closest living direct descendants to Harry.  Ancestry records showed that Martha died in 1965 and Walter in 1968 at Timaru.  Of their four children –Noeline’s family was the one I was able to make contact with.

Noeline had married Robert Herriot (his 2nd marriage) of Wainui, Banks Peninsula in 1950 and fortunately for me they had resided most of their married lives at the same address in Sydenham, Christchurch.  Widow Noeline had died at Christchurch in 2014 aged 91yrs, however from her surviving family I was able to trace some of her and Robert’s children through the Internal Affairs BDM records – Hilary Frances, Philip David, and David John.

The Spark White Pages revealed a contact for Philip David Herriot who was able to confirm some of my information and conclusions, and his ancestral connection to his late uncle Henry Annals.  Philip was also able to put me in touch with his sister Hilary (Christchurch) for more detail of the family’s history.

With the exception of Harry’s (William Henry Andrews) service medals, the whereabouts of the other three Annals brothers service medals are not known.  Fortunately Philip’s mother had given him his uncle Fred’s (Frederick James) Memorial Plaque which had been sent to his Harry’s father, James Annals in 1949.  Fred’s Memorial Plaque had been found by being dug up in a garden by a Mr Gomez at Te Kowhai, Frankton in the North Island.  Mr Gomez had made every effort to find the Annals family and, after contacting NZ Defence in Wellington was advised to send the Plaque to the address of Harry’s father James Annals, that was listed on Harry’s military file.  As James Annals had died in 1933, the medals and plaque were forwarded to Sarah, c/o Mrs S. Gale, Pleasant Valley, Geraldine.  Mrs Samuel Gale was in fact Mary Harriet Gale (nee Annals) the oldest child and daughter of James and Sarah and with whom Sarah had been living her husband’s death.  Sarah retained the medals and plaque until her death in 1965 at which time custody passed to her surviving son Walter, and then on to Walter & Martha Annal’s daughter Noeline Joyce Herriott.  Noeline in turn passed Fred’s Memorial Plaque onto the current custodian, her son Philip David Herriot.

By now however, the whereabouts of Frederick James Annals’ two WW1 service medals, and Henry’s Memorial Plaque (also named to William Henry Andrews) were, and still are, unknown.

It will give me great pleasure to be able to return Henry’s medals (also named to William Henry Andrews) in person to his descendants, grandson Philip and grand-daughter Hilary when next I am in Christchurch in a couple of weeks time.

Thanks to Julie, Philip and Hilary for helping to pull the threads of this case together and fill in the blanks.

The reunited medal tally is now 61. 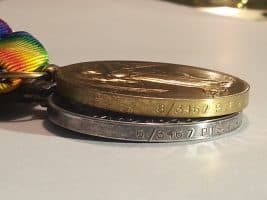 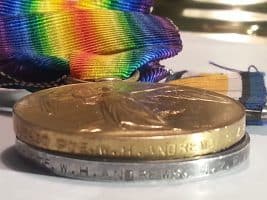