In September 2018 we related the story of the death of 22 year old LAC George Firman (see below), one of 20 airmen on board a 40 Squadron Dakota aircraft that was returning to New Zealand from the Pacific Islands, having completed their tour of duty.  Bound for RNZAF Station Whenuapai, the aircraft never arrived.  It was later believed to have crashed into the sea as a result of striking a severe storm front the pilot had reported was forming ahead of them.  All passengers and crew on board were lost, and no trace was ever found of the aircraft.

A Memorial Cross that commemorated George’s death together with his war medals, were subsequently sent by the NZ Defence Department to his grieving parents.  The medals George had earned were: 1939-45 Star, Pacific Star, War Medal 1939-45 and the New Zealand War Service Medal. 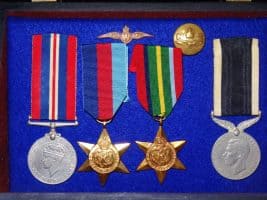 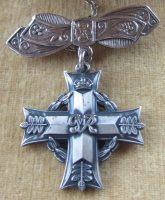 MRNZ became instrumental in the return of two of these medals after they had been spotted for sale on Trade-Me.  I was delighted to learn recently that all of George’s medals have now been reunited and reside in the safe custody of his descendant family in a presentation box.

AircrewRemembered.com has commemorated the tragic loss of these 20 airmen on this ill-fated flight from Espirito Santo enroute to Whenuapai with a comprehensive coverage of the flight and crew, click here >> C47-B Douglas Dakota (DC3) Serial No. NZ 3526