In April 2015 Lorraine Cannon of Wanganui posted an advertisement in the “Lost Trails” section of the RSA Review newspaper.  She was seeking any information that might help her to recover the lost war medals of her late grandfather,  24/1347 Rflm. Thomas Birkby CANNON of Wanganui.  The medals had been lost to the family sometime after Thomas’s death in November 1972.  During her search for the medals Lorraine had been told they had at one time been in the hands of a well known Wanganui medal collector.  Around 2008 the “Richard SKELSEY Collection” had been sold to another Wanganui collector for the “Major LOVEGROVE Collection.”  Lorraine was also told that since then, the Lovegrove Collection had since been dismantled and the medals sold to a variety of buyers – there ended Lorraine’s information trail.

The ‘RSA Review’ is a quarterly publication circulated by the RNZRSA for its members.  The “Lost Trails” column of the Review posts advertisements by members of the public looking for relatives medals or seeking to return medals that have been found.  Medals Reunited NZ (MRNZ) now routinely duplicates this information onto its MRNZ website pages Medals~LOST & FOUND, a gratis service whereby the information is circulated nationally and internationally via the internet.  After two quarters had passed (Oct 2015) I noted Lorraine’s request was still being published in the RSA Review and so emailed her to check if she had had any responses.  If not, I would post her request on my website – she had not, and so I did … One year and two months later I received a phone call on 01 Dec 2016.

Shane Abercrombie is a former serviceman, militaria collector & trader from Auckland had spotted Lorraine’s request in the Review.

MRNZ advertises our FREE services in each issue of the RSA Review in their “Lost Trails” column which is how he learned of our service.  Shane had looked at the website  and then contacted me after seeing Thomas Birkby Cannon’s name listed in the LOST medals section.   Shane told me a customer had sold him the Cannon medals some years ago and that he had retained them for his personal collection out of professional interest.  He also said the medals had bee accompanied by a large collection of ephemera  (not something Lorraine or I knew  existed).  On seeing Lorraine’s request, Shane made the decision to part with the collection and contacted me to facilitate an arrangement with Lorraine. 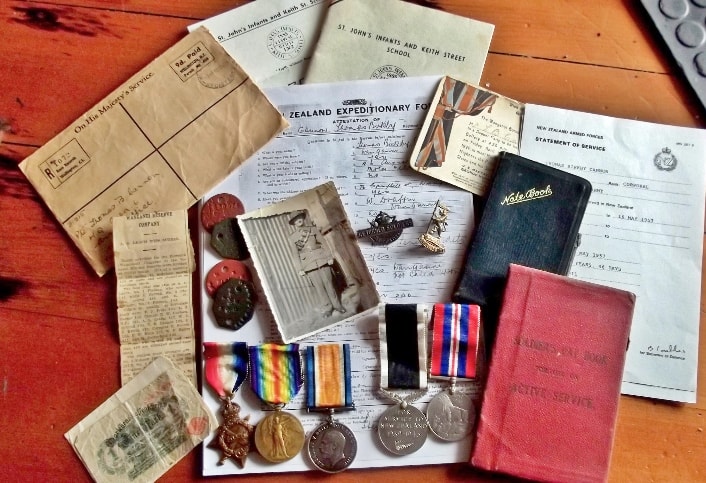 Medals and more … a bonus for family ! 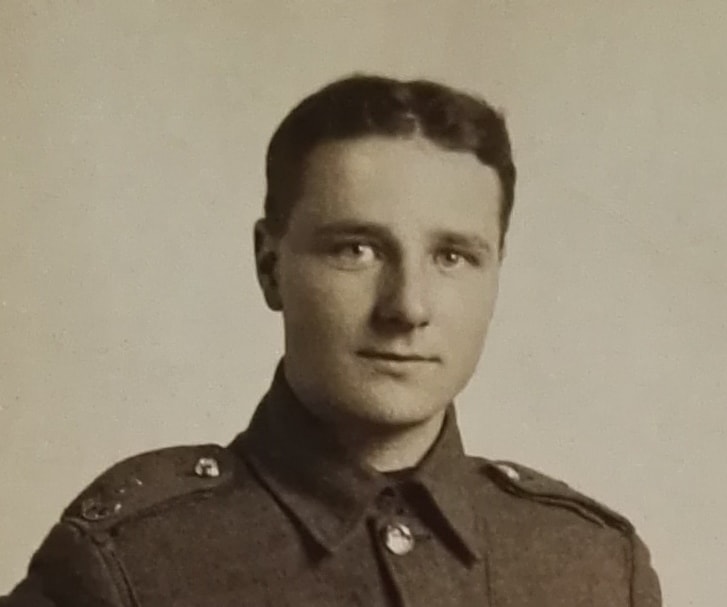 Thomas Birkby Cannon, the son of Thomas Cannon (NSW, Australia)  and Caroline PAUL (England) of Wanganui, was born in August 1896 in Wanganui where, apart from his war service, Thomas lived and worked his whole life.  Thomas was employed as a motor mechanic before WW1 and like numerous other men of eligible age had to put that aside when he was was balloted for military service in 1917.

After his preparation at Trentham Camp, Rflm. Thomas Cannon embarked for Egypt on the HMNZT Willochra which left Wellington on 13 Nov 1915 with the 2nd Battalion, 2nd Reinforcements of the NZ Rifle Brigade.  Arriving at Alexandria in February 1916, Rflm. Cannon and the NZRB reinforcements were taken to Zeitoun Camp for training and subsequent local operations in and around Egypt and the (Suez) Canal zone.  Thomas had been placed with Wellington Infantry Regiment.

In June 1916 Rflm. Cannon was on the move yet again.  He boarded the NT Nile which moved his unit to England where his unit was concentrated at the NZ Command Depot at Codford where they would undergo training and preparation for their eventual transfer to the Western Front in France.

The Wellington West Coast Company was one of a number of units embarked in May 1917 for France where Rflm. Cannon joined his unit, 3rd Wellington Infantry Battalion, in the field.  By October he had been promoted to Lance Corporal and in December was evacuated to hospital following a gas attack.  not severely affected, Thomas recovered and returned to his unit after just one week.  In April 1918, L/Cpl. Cannon was transferred to the 2nd NZ Entrenching Battalion.

Since his arrival in France almost 18 months before, L/Cpl. Cannon had had no substantial leave until finally a transport ship to the UK came his way at the end of July 1918.  Thomas obviously enjoyed his leave and probably never gave too much thought to returning to the front .. well, before it was absolutely necessary anyway.  However the gravity of his ‘oversight’ in failing to return from his one week of leave on August 8th jerked him back to reality when he was arrested on October 29th by the local civilian Police and placed into military custody (gaol) pending his return to the Wellingtons (under escort) in France the following month.

The NZ command took a very dim view of soldiers who failed to return from leave, particularly by an NCO – he would not be returning to France.  L/Cpl. Cannon was charged with failing to return from leave by the due date (AWOL), and being deficient of arms, equipment and kit – to all of which he pleaded “Guilty, Sir”.   The Field General Court Martial convened for his trial predictably found him Guilty and L/Cpl. Cannon was sentenced to One Year IHL (Imprisonment with Hard Labour).    L/Cpl. Cannon was reduced to the rank of Private, was required to forfeit a large number of days pay, and then dispatched to serve his sentence at Wandsworth Prison on 19 Jan 1919 .  The Army took a particularly dim view of AWOL and usually made an example of the transgressors as warning to other would-be ‘runners.’

Pte. Cannon was release from Wandsworth in June 1919 after four weeks were remitted from his sentence for time spent in custody prior to the Court Martial and also took into account various periods under escort in England and several periods in hospital.  Pte. Cannon was returned to the NZ Command Depot at Codford pending his repatriation to NZ on 28 July 1919 aboard the Hororata.  Pte. Cannon was discharged in October 1919 having completed a total of 3 years and 312 days of overseas service.  Pte. Cannon was awarded the 1914/15 Star, British War Medal and the Victory Medal.

Once back in NZ, ‘Birk’ (as he was known) headed straight back to Wanganui and within a matter of months had married Anastasia (known as “Stasia”) SYMONS.  He returned to his old job as a motor mechanic whilst he and Stasia started their family which eventually swelled to four girls and one boy.  ‘Birk’ had loved the soldiering life in spite of his having fallen foul of authorities during the war, and on his return home had continued his interest by way of part time (Territorial) service as a clerk in the Wanganui Army Office.  Once his family was started, together with his part time involvement with Army. ‘Birk’ decided to give up his motor mechanic’s job and worked on and off as a general labourer to accommodate his Army employment.

Once WW2 broke out, ‘Birk’ once again found himself balloted for war service.  He was attested in June 1940 however given his age and family commitment he was enlisted into the Territorial Force, NZ Temporary Staff in February 1942 for service in New Zealand.  A new Regimental Number, 2/19/37 Pte. Cannon was called up for full-time service in fairly short order because he was an experience man.  He was yet again re-numbered and re-designated: 31515 Pte. T. B. CANNON – NZ Regt, NZTS – Home Service (RF) … phew, quite a title ! .. meaning, he was enlisted into the NZ Regiment (Infantry) as a member of the Army NZTS (NZ Temporary Staff) for Home Service in NZ only, on a Regular Force (RF) full-time basis.  In September 1942 he was promoted to Temporary Corporal however relinquished the rank at his own request in July 1944.

Pte. Cannon had been engaged for the duration of the war in the NZ Regiment as the QM (Quartermaster or Storeman) for HQ 11 Company, Northern Military Region, Wanganui (Area 6) – Home Service Section – RF, a position he held until March 1946.  When the war ended soldiers returning home exited the Army en mass.  Soldier shortages in the NZ Interim Army were critical in many trades which resulted in the opportunity for Pte. Cannon’s continued service.  He was re-enlisted in May 1946 for home service in New Zealand’s post-war Interim Army (NZTS – IA) until 31 March 1948.  On April 1st Pte. Cannon’s services as the HQ Storemen of Area 6 (Wanganui) remained in demand.  Another engagement for two additional years was approved after that.

In June 1950, Pte. Cannon was persuaded (finally!) to accept the inevitable (but necessary) promotion to L/Cpl. and then Corporal (Cpl.) along with an offer of re-engagement for an additional three years which he accepted.  Thereafter, Cpl. Cannon was re-engaged on a yearly basis until he reached the mandatory age for retirement.

Cpl. ‘Birk’ Cannon was discharged from the Army after completing his last engagement on 16 May 1957, just weeks short of his 61st birthday.  His 41.5 years of of  service from November 1915 until June 1957 was a very creditable contribution to one’s country by any measure.  ‘Birk’ had certainly made good after the one black spot on his length career.  Apart from earning two Good Conduct Badges (GCB) during his post-WW2 service, Cpl. Cannon was also awarded the 1939-45 War Medal and the New Zealand War Service Medal to add to his trio of First World War medals. 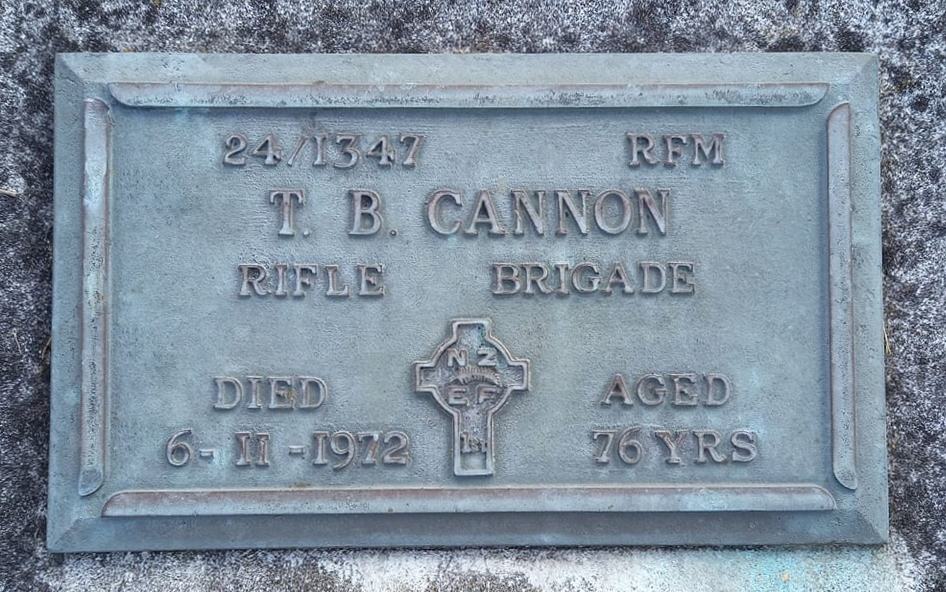 Shane advised me he was happy for the family to have the opportunity to negotiate the return of the medals.  I had not contacted Lorraine for over a year but told Shane I would try and determine if the family was still interested.

I called Lorraine and gave her the good news and that apart from the medals there was also a quantity of her grandfather’s military documentation and other ‘stuff’ that accompanied them.  Lorraine could not believe her ears and in fact when I called her she was  about to place another searching notice in the local newspaper to try and find any information that would help her to find Thomas’s medals.   She confirmed with me she had not been contacted, and yes, the family were very definitely still interested in finding the medals.  Since both Lorraine and I had never met or had any previous dealings with Shane I advised he to proceed cautiously and suggested some steps for her to take before committing herself to any agreement.

I then phoned Shane and said I had made contact with the family who were absolutely delighted with the opportunity to retrieve the medals back into the family.  I then put them in touch with Shane to negotiate.

That was about five weeks ago.  Lorraine had some friends view the items on her behalf to verify the items as being genuine.  Shane proved to be as good as his word and an honest and fair trader.  Lorraine phoned me on 24 December with the news that she had received all of her grandfather’s items that Shane had offered her (and more!) and that the family was very excited.

Thank you Shane – you have really made Lorraine’s and the Cannon family’s Christmas and New Year.

The reunited medal tally is now 97.

UPDATE – to read the postscript to this story, click here