Most medal of my medal cases have involved fairly lengthy periods of research, awaiting responses and/or receipt of evidence based confirmation.  Rarely do I manage to resolve a case in such quick time as this one.  A British War Medal and a Victory Medal named to 47767 Pte. Stewart John SCOONES was offered to MRNZ from a deceased estate.  The unusual name of this soldier was a key factor to my being able to confirm a family descendant with whom to reunite these medals – in exactly 17 minutes !

Stewart John (“Sandy”) Scoones was born in Dunedin in 1888.  The son of Captain George Thomas Scoones and Annie Scoones (nee Irwin) Sandy was one of four sons in a large family who were to serve in WW1. The Dunedin Scoones family arrived in New Zealand in the 1860’s around the time of the Otago Gold Rush.  Sandy’s English grandfather Captain George Edward Scoones was a Master Mariner and ship owner who brought his wife Mabel and son George Thomas to Dunedin where he took up the position of Otago Harbour Pilot. The family had a mix of English/Irish roots.

Sandy’s father George Thomas Scoones was born in Geelong, Victoria, Australia and was married to an Irish lass, Annie IRWIN in Dunedin in 1881.  Annie and George had a family of four sons and five daughters.  Annie died in 1897 and Capt George Scoones re-married a widow, Mary Lavinia PAGE (nee WRIGHT) in 1899, residing originally in the Dunedin suburb of Maori Hill and latterly North East Valley, where the Scoones family remained for close to a century.

Sandy Scoones was nearly 29 years of age and working as a Stock Hand for the National Mortgage Agency Company in Dunedin at the time he was ‘called to the Colours’.  Pte. Scoones was enlisted into the Otago Infantry Regiment as part of the NZEF 25th Reinforcements and sailed for Egypt on the Tofua in Feb 1917.  No sooner had he arrived in France Pte. Scoones had a bout of Measles.  From that time on, other than routine sicknesses, Pte. Scoones remained unscathed until March 1918 when he was stricken with a severe case of ‘Trench Fever’.  His resulting debility effectively terminated his active service, after a total of 1 year and 241 days foreign service.  Pte. Scoones was evacuated to England in March 1918 and onward to New Zealand in November that year, being posted as “no longer fit for active service resulting from illness”.

Three of Arthur and Emma’s sons (Arthur Ernest, George Stewart and Stewart Irwin Scoones) fought in WW2, and the forth son William Peter (Bill) Scoones saw service in the Korean War.  Bill, now aged 90 who lives in Dunedin with his second wife Irene, is the sole surviving direct descendant of Pte. Stewart Scoones. 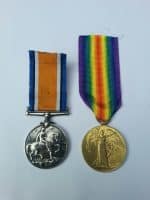 When I first saw the “Scoones” name on the medals it bought back memories of a former colleague I had worked with the 1970s.  The RNZAF officer bearing this surname was Grant Neilson Scoones, whom I recalled had hailed from Dunedin.  Finding so few New Zealand residents named Scoones in the census records, and even fewer in the NZ White Pages (10 currently, two of whom reside in Dunedin), I felt sure that through Grant there was probably a good chance i would be able to reach a positive conclusion.

By sheer unrelated coincidence I had also spotted Grant on Facebook only two days prior to opening the Scoones case.  After a quick scan of Facebook I located the now retired RNZAF officer in Marton, Rangitikei and sent him message.  Grant responded almost immediately and as luck would have it, told me that as the family historian he had just spent the previous four years researching the family, and so was able to confirm his connection to Pte. Scoones.

The net result of my research for a direct descendant of Pte. Stewart Scoones has resulted in grand-nephew Grant being identified as the nearest and most appropriate relative to be the custodian of Stewart’s WW1 war service medals.

The medals of 47767 Pte. John Stewart Scoones have been couriered to Grant.  Regrettably however, the medals of Grant’s grandfather – 8/4014 Sgt. Arthur Edward Scoones and his siblings still remain missing.

The reunited medal tally is now 85.