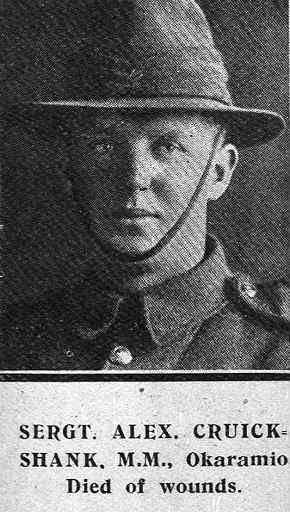 The original story concerning Sjt. Cruickshank related the return of  his Memorial Plaque (read here) sent to his parents in 1922, how it had arrived anonymously at MRNZ from Ireland in 2012, and its subsequent reunification with his Sjt. Cruickshank’s medal group displayed in the Marlborough (Blenheim) RSA.

Since that post and to my utter surprise, a British War Medal (BWM) minus its ribbon, also named to 6/2105 Sjt. A. Cruickshank arrived in the post from the same anonymous source as his Memorial Plaque !

Being somewhat skeptical that the new arrival may be a fake or a duplicate, since to the best of my knowledge the medal group in the RSA was complete.  On closer inspection the medal indeed proved to be completely genuine – correctly impressed, letter font was in the correct style, and the degree of wear marks on the medal was consistent with its age.  So why was there apparently two BWMs awarded to Sjt. Cruickshank?

I contacted Marlborough RSA President, John Forrest, and told him what I had and would he please check the existing medal group to see that they were all genuine however at that time, the key to the medals display case was in the curators care and not readily available.  John however viewed the medals in the case and assured, in his opinion, they were all genuine.

Taking John at his word, my initial thoughts were; since the medal I was holding was either the original or a Duplicate (issued replacement for a lost medal, as opposed to a Replica), then the BWM I had must have either have been lost or stolen, or it was a Duplicate which had been issued to replace the lost/stolen original.  Another possibility was that if the the BWM that was currently mounted in Sjt. Cruickshank’s medal group was genuine (not a Duplicate or Replica) having been added to replace the missing BWM (the one I received?), then the BWM in his current medal group was either an un-named factory blank, or named to someone else?  The last and least likely possibility was that the medal in the group was a Replica inserted to complete the group for display purposes, however John had already assured me they were all original.

John advised me a comprehensive stocktake was to be taken in the near future and a medal specialist would be on hand to re-catelogue the RSA collection.  I asked John that the medal specilist conduct some specific checks while they had access to Sjt. Cruickshank’s medals, specifically, to make an assessment of how genuine the medal was, and details of the impressed soldiers service details on the rim of the medal (font, depth, wording etc). 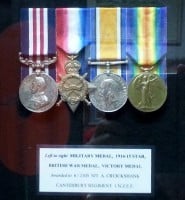 John phoned me back after the stock check and confirmed that the BWM mounted in Sjt. Cruickshank’s group was not his – it was in fact named to a Canadian Infantry soldier – 226416  PTE. R.A. WILLIAMS. 102 CDN INF.  After some discussion it was thought the medal must have been inserted (by mistake or otherwise?) possibly when the medal collection, which had largely been a collection of un-mounted medals displayed in the RSA’s foyer at the time, were being tidied up and mounted by a volunteer member some 35 odd years before.

As with Sjt. Cruickshank’s Memorial Plaque, how this medal found its way into an Irish collectors hands will likely always be a topic of speculation.  Needless to say this will prompt very close scrutiny and recording of any other medals that might be donated to the RSA in the future.

A very satisfying outcome – I will be reuniting the British War Medal with Sjt. Cruickshank’s correctly named medals during my next visit to Blenheim in a couple of weeks time.  The medal group of 6/2105 Sjt. Alexander Cruickshank, MM may then be accurately recorded as being 100% present and correct (and genuine) as was personally presented to Sandy’s (Alexander) mother in 1919.

“He sleeps beside his comrades,

In a land to us unknown;

But his name is written in letters of love

On the hearts he left at home”

This verse was placed with Sjt. Cruickshank’s obituary notice in the Oamaru Mail in May 1918, inserted by his  sister, Mrs. Barbara McMurtrie.

P.S. – MRNZ will also attempt to trace the descendant Canadian family of Pte. Williams and return his medal.

The reunited medal tally is now 59. 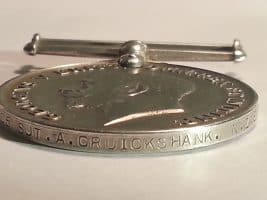 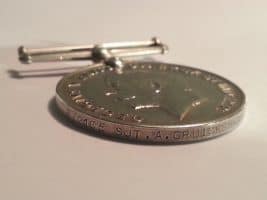