The Memorial Plaque (‘Death Penny’) commemorating the death of 7/720 Trooper Silas John Gibson has had a largely unknown history in its 93 plus years since being sent to his brother.

This plaque arrived anonymously at MRNZ in a Blenheim postmarked package – no accompanying explanation?  I suspect someone may have had a change of heart and decided the plaque should belong with Silas Gibson’s descendant family.

My initial research revealed that Silas Gibson was born in the Aorere Valley near Collingwood, the son of a farmer who grew up to be a bushman working in and around Motueka, Marlborough and the Buller regions.

Being a capable horseman, Trooper Gibson enlisted for war service in October 1914 with the 10th Squadron of the Canterbury Mounted Rifles and soon found himself on his way to Egypt with the 2nd Reinforcements in December 1914.  Sadly as for so many, Tpr. Gibson’s life was cut short when on 28 August 1915, only four years after his 23rd birthday, he was reported missing, presumed dead.  Silas’s body was never found – he was officially reported as having been Killed In Action just 12 days after arriving on the Gallipoli Peninsula, and is commemorated on the Hill 60 (New Zealand) Memorial located in the Hill 60 Cemetery, Turkey.

Tracing Silas’s descendants was a relatively easy task.  His military file had shown his designated next of kin was his brother, 25/544 Rifleman Charles Henry Gibson, NZRB of Murchison.  It must have been with some trepidation and sadness for Charles when he embarked for war service in France in 1916.  Charles himself was severely wounded but fortunate enough to return home.  In later life Charles and his family relocated to Blenheim so it is perhaps understandable that although separated from his medals, Silas’s Plaque has remained in the Blenheim area.

The White Pages lists only two Gibson families living in the Westport area, the next closest being Greymouth, so it was a simple process of elimination.  Paul & Sue Gibson were first on the list to try and connect the Gibson family dots.  Since Silas had died so young, and Charles Gibson in 1967, little was known of Sila’s existence much less his connection to the family.  Paul put me in touch with his brother Raymond (the only other Westport listing) who was able to confirm the brotherly connection between their grandfather Charles and Silas.

The Memorial Plaque is now on its way home to the Gibson family.

The reunited medal tally is now 36. 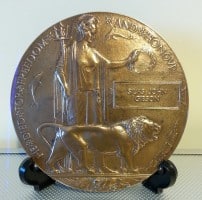