The medals of Gunner Nisbett were one of 10 sets of WW1 medals which had been left with the Nelson RSA by widows and family members over the preceding decades.  As a way of acknowledging the 100th anniversary of the ANZAC landings at Gallipoli, and the subsequent commemorations of various key WW1 battles in Europe that would be held over the next four years, RSA President Barry Pont and his Committee decided to offer all of the WW1 medals in the RSA back to descendant families.  Read the Nelson Weekly article here: http://nelsonweekly.co.nz/rsa-to-return-wwi-medals-to-families

Finding descendants for these medals proved quite a task as most of these soldiers either did not marry, had no children, died early, were from the UK or Australia, and/or had no known surviving family, so progress had been very slow after an initial response by a few families.

As at January 2015 five of the 10 sets of WW1 medals still remained with the RSA, no known descendants had come forward to claim them.  It was at this point I offered the services of MRNZ to research those named on the medals to try and find living descendant.

11/2268 Gunner Percy Lator NISBETT was born and bred in the Tasman area.  A shepherd at ‘Fox Hill’, Belgrove in rural Nelson, Percy worked the farm with his father and brothers until volunteering for war service in January 1916.   Originally a Rifleman who was enlisted into the Wellington Mounted Rifles, then Rflm. Nisbett arrived in Egypt for operational training, was transferred to the New Zealand Field Artillery (NZFA) as a Gunner/Driver and over the next three and a half years served in various Artillery Batteries throughout France.  Gnr. Nisbett almost survived the war unscathed however his luck ran out in October 1918.  One month before the Armistice he sustained a severe gunshot wound to his face.  This injury together with his increasing physical debility after such a lengthy period on overseas war service (4 yrs and 6 days), exposed to disease and inconsistent nutrition, Gnr. Nisbett was finally evacuated from the battle front to the Military Hospital at Bethnal Green and eventually returned to NZ in February 1920.   Gnr. Nisbett recovered fully, married and continued to live and work as a farmer in the Tasman and Nelson area until his death in 1958, aged 77 years.  His medals were passed to the Nelson RSA for safe-keeping by his widow Ada.

I received a phone call in October 2014 which provided a clue to Gnr. Nisbett’s family descendants, albeit the call was from a reasonably distant (former) family member.  After checking the veracity of this connection I thought it might be pertinent to spread the word a little wider through my network and wait for a while longer to see if any other, more closely related family descendant surfaced – after all some 95 years had elapsed since the medals were issued so a little longer was not going to make much difference.   The next five months (over Christmas 2014) was quiet with no substantial leads.  I was resigned to the medals going to the only known (former) descendant who had identified herself when suddenly, out of the blue on the day before Anzac Day this year, I received a call which floored me.  Mrs Vivienne Bolton (nee Nisbett) was living in Brightwater (rural Nelson) and told me that she was the daughter of the late Cliff (Ross Clifton Hillier) Nisbett – Percy Nisbett’s brother,  ergo Vivienne was Percy’s great-niece and she was calling to ask if I could find her great-uncle Percy’s medals ! 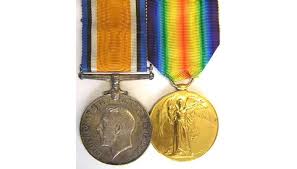 Whilst MRNZ does not normally search for family medals, this was a very simple case that required no further research and was on our ‘doorstep’.  Vivienne had not seen or been told of the offer by the RSA in the June 2014 newspaper article of the RSA’s offer to return the WW1 medals to descendant families, but had heard of MRNZ’s work from a friend.  It had been the approach of the high profile 100th Anniversary of the Gallipoli Landings that was to be commemorated on Anzac Day 2015 which prompted Vivienne to call me and ask for help.  I wish all returns of medals were as easy as these.

As a result of Vivienne’s call, I quickly confirmed her Nisbett family connection and those of her daughter, Sarah B., who was very keen to wear them.  I am happy to say a very proud Sarah B. collected Percy’s medals from Nelson RSA President Barry the same day.  Clutching them tightly in her pocket, next morning Sarah attended the dawn parade at Trafalgar Park with a renewed sense of pride in being able to honour her great-great uncle, Gnr. Percy Lator Nisbett’s memory and war service.  Vivienne and Sarah were delighted with the fast resolution and outcome and so my MRNZ colleague Brian has arrange to mount the medals for Sarah so she will be able to wear them on Remembrance Day this year.

Only four more medal groups left to reunite with families ….

PS – Gnr. Nisbett’s illuminated “Great War Certificate of the Services in the New Zealand Expeditionary Forces” (as seen above) is on display in the Nelson Museum.