This is yet another case of a Memorial Plaque and medal ‘lost’ to an NZEF soldier’s family by time and circumstance.  The plaque commemorates the death of Maurice Clifton Drummond, a former Motueka Mounted Rifleman and WW1 infantry soldier who was Killed in Action in Belgium, 1917.

James Drummond (1836-1935) was born in Monzievaird* Perthshire, Scotland and emigrated to Nelson in 1855 with parents, John and Marjorie DRUMMOND (nee MacGREGOR), and his eight siblings (4 boys and 4 girls).  The family settled initially at Riwaka.

Historical Note: * Monzievaird (translation: “the place where corn is stored”) is situated two miles west of Crieff in the Highland District of Perth and Kinross, Perthshire – a place with Drummond history.

The Massacre of Monzievaird – immediately following the Battle of Knock Mary on 21 October 1490, the Drummonds and Campbells set fire to the old church of Monzievaird; some twenty Murrays were killed.  James IV of Scotland, on news of the massacre, gave orders for the arrest of the main perpetrators, David Drummond and Duncan Campbell of Dunstaffnage. They were executed at Stirling shortly thereafter. The nation was horrified and this event was considered at the time to have been sacrilegious.

Twenty three year old James Drummond moved from Riwaka to the Upper Moutere in 1859 where he had purchase two 50 acre blocks of hillside land and would erect a dwelling close by.  In 1865 he married New Plymouth born Elizabeth Jane Rickard OLD (1846-1910) at Springrove.  James and Elisabeth’s family would eventually number 11 children however their remote hillside location made access to schooling for the first of their children an arduous and sometimes dangerous trip on foot.  Anticipating his family would continue to grow in number James built a second, more substantial family home in Lower Moutere, much closer to the road (now the Moutere Highway) to make it easier for the children to get to school.  The area the Drummond home was built in is now known as Braeburn, Lower Moutere (SW of Nelson), a name synonymous with the very popular apple variety of the same name which was created, and still grown there for the NZ and export markets.

Maurice Clifton Drummond was the last  of James and Elisabeth’s 11 children (4 boys and seven girls) to be born at Braeburn in March 1889.  His schooling was brief.  Maurice had not reached the 4th Standard before leaving to farm his own land in Braeburn which he had leased in 1907 from the time he was 18.  Maurice had also joined the district’s territorial volunteers as a mounted soldier, enlisting with the Motueka Mounted Rifle Volunteers (MMR) in 1909.

In 1916, 27 year old farmer Maurice Drummond’s interest in events on the other side of the world was entirely focused on the Gallipoli campaign in Turkey.  As for the other young men of the district, Maurice’s name had been added to the government’s compulsory registration of all men 20-45 years who could be called for war service with the NZEF.  It was a nervous wait for the young men of the region waiting for their call to serve King and Country, and pondering their own fate.

For the young men of Maurice Drummond’s age group, Christmas 1915 must have been filled with trepidation, not just for those waiting to be called up, but also for their families.  The casualty lists published regularly in the local newspapers from the fighting at Gallipoli made for grim reading – who would not be coming home, or who would be returning maimed or sick?   For the parents of those men yet to go the casualty lists also spoke volumes.  Whilst filled with pride their sons were ready, willing and able to serve, all knew there was a very real possibility that their next Christmas together, may well be the last (ever). 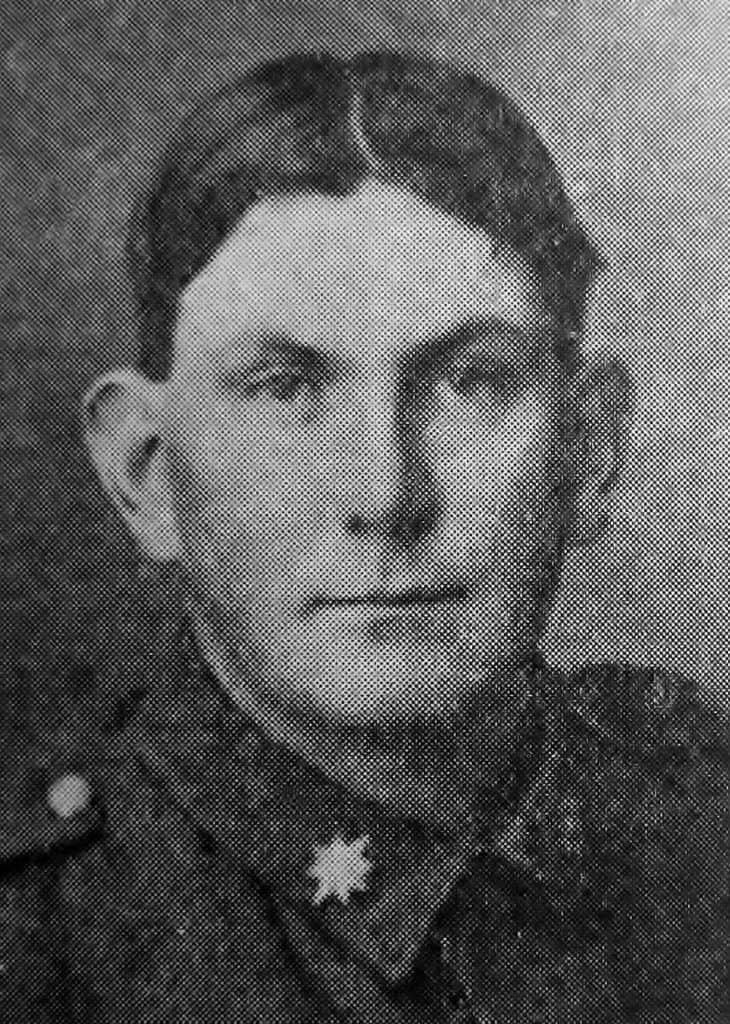 29235 Private Maurice Clifton Drummond had volunteered for service rather than be conscripted, signing up when Motueka’s National Register for war service was started in May 1916.  Once registered, the next step was for each soldier to undergo a medical assessment for fitness to serve overseas.  Pte. Drummond was off to a good start – mature at 27 years of age, 6 ft tall, weighing 185lbs (83.9kg), this very healthy specimen of youthful war fighting Kiwi manhood presented himself to the Motueka GP, Dr. Thomas H. Horrax, on 25 May 1916.  Without any equivocation, Dr. Horrax stamped “FIT“ on Pte. Drummond’s Medical History with no other significant comments, save reference to a scar on Maurice’s left knee … Maurice would soon be on his way to join the NZEF in France.

Pte. Drummond arrived at Trentham on the 20 June, was officially enlisted and attested for service on the 25th, and transported by rail to the Featherston Army Training Camp in the Wairarapa to start his 16 weeks of basic infantry training on 28 June 1916.

A week in Trentham Camp hospital with Influenza preceded Pte. Drummond’s embarkation of HMNZT 67 Tofua at Wellington on 11 October 1916 with the 18th Reinforcements of the Canterbury Infantry Regiment (C.I.R.).  The Tofua arrived at Devonport, Plymouth on Dec 28th where the Reinforcements disembarked and  were immediately railed to the NZ Infantry Depot at Sling Camp on the Salisbury Plain.  On arrival the new soldiers were all officially posted to the NZEF’s Reserve Battalion, from here they would be allocated to sub-units within the Regiment as required.

Pte. Drummond and his fellow C.I.R. Reinforcements left Devonport for France on 01 Feb 1917, arriving at Etaples on the 5th at the Allies largest Training Base Camp in France.  It housed in excess of 100,000 soldiers in 1917 alone.  A re-distribution of the new reinforcements to units that required vacancies filled (due to casualties and evacuations) took place on the 24 Feb, with Pte. Drummond being allocated to the ominously numbered 13th Company of the 1st Battalion, Canterbury Infantry Regiment.  From the time of his arrival in France, Private Drummond’s Active Service card recorded just four entries:

* The whereabouts of Pte. Drummond’s Victory Medal is unknown; if you are able to provide any information which may help the family to recover it, please contact MRNZ

Note:  ** 29235 Pte. Maurice Clifton Drummond was killed on 07 May 1917, his 77th day in the field (a Monday) during the shelling of the Hutments (soldiers accommodation) at “Bulford Camp” in Belgium (not to be confused with the NZ Infantry Depot at Sling Camp).  “Bulford Camp” was located at Neuve Eglise (Nieuwkerke), a large allied camp about 12 kms South of Ypres, and 10 km NW of Armentieres in Belgium.  Pte. Drummond (28) was buried in the La Plus Douve Farm Cemetery, Comines-Warneton, Hainaut, in Belgium. 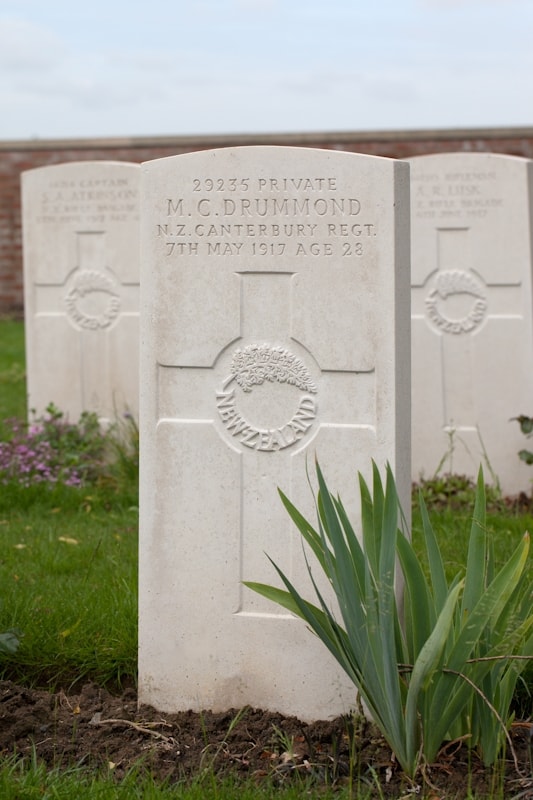 Pte. Drummond’s service and sacrifice is also commemorated at the following places:

Note:   7/189 Sergeant (SQMS) Louis Kenneth Drummond, Canterbury Mounted Rifles was the elder brother of Maurice and also ran his own farm at Braeburn.  Trooper Drummond enlisted on 14 August 1914 and embarked in October with the NZEF’s Main Body, for Egypt and Gallipoli.  Louis served the entire war with the Canterbury Mounted Rifles both at Gallipoli and afterwards in the Sinai and Palestine, being promoted to Sergeants – Squadron Quatermaster Sergeant (SQMS).  Louis returned unscathed to New Zealand in June 1919 and discharged from the NZEF on 09 Sep 1919 having served 4 years and 301 days overseas.

The Memorial Plaque and British War Medal named to Pte. Maurice Clifton Drummond found their way onto TradeMe in 2014.  The plaque and medal appeared on TradeMe at the same time as a second Memorial Plaque was put up for auction.  Both were successfully ‘rescued’, one of which was recently reunited with a direct descendant living in London. (see 24/2541 AW McMillan post) 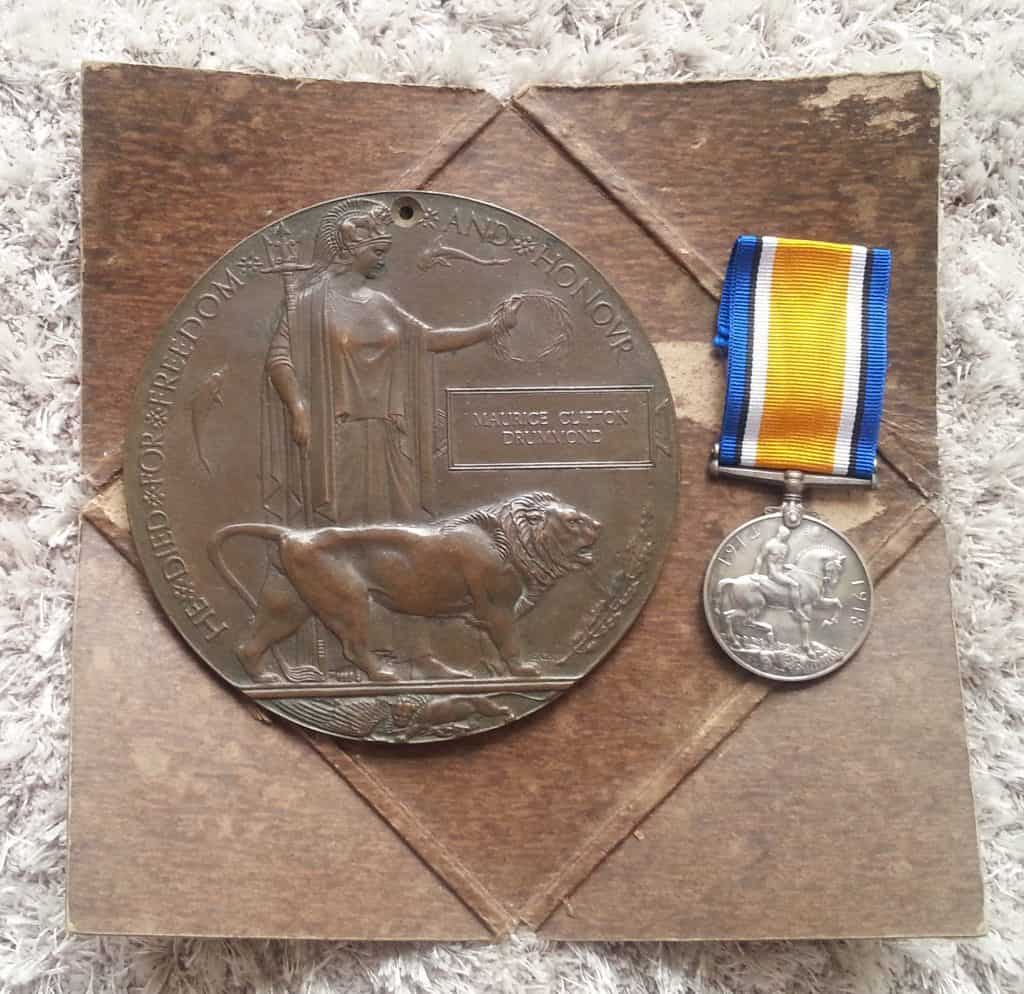 Josh S. of Dunedin is a keen family genealogist and takes a particular interest in the military veterans within his family.  Each year Josh honours his grandfather by wearing his WW2 medals on ANZAC Day and Remembrance Day.  Josh happened to spot the Cenotaph entry from MRNZ posted on his great-grand uncle Maurice Drummond’s web page which indicated we were holding medals belonging to Pte. Drummond.

Josh made contact with MRNZ, explained his connection and enquired as to the possibility of claiming the medals.  He subsequently backed up his request with the documentary proof we required to validate his claim, plus provided a brief biography of Maurice Drummond (which is incorporated within this text).

During my own checks of Josh’s entitlement I came across a newspaper article (ODT-2014) which convinced me Josh was exactly the right person to have custody of Pte. Drummond’s medals.  The article praised Josh for his commitment and participation in his hometown’s WW1 project to commemorate the 100th anniversary (2014) of the start of WW1 on 28 July 1914.  In addition the article stated Josh had taken active roles in numerous other commemorative activities to honour the memory of local Veterans.  His efforts were also acknowledged by his local RSA.  Josh was granted full membership of the local RSA thus becoming its youngest member ever.  Well done Josh !

On the combined strength of this information, I could not think of a better Drummond family representative to entrust Pte. Drummond’s medal and plaque with.  Josh is now the proud possessor of both.

Note:  * The whereabouts of Pte. Drummond’s Victory Medal is unknown.  If you are able to provide any information to assist in its recovery for the family, please contact Ian at MRNZ.

The reunited medal tally is now 199. 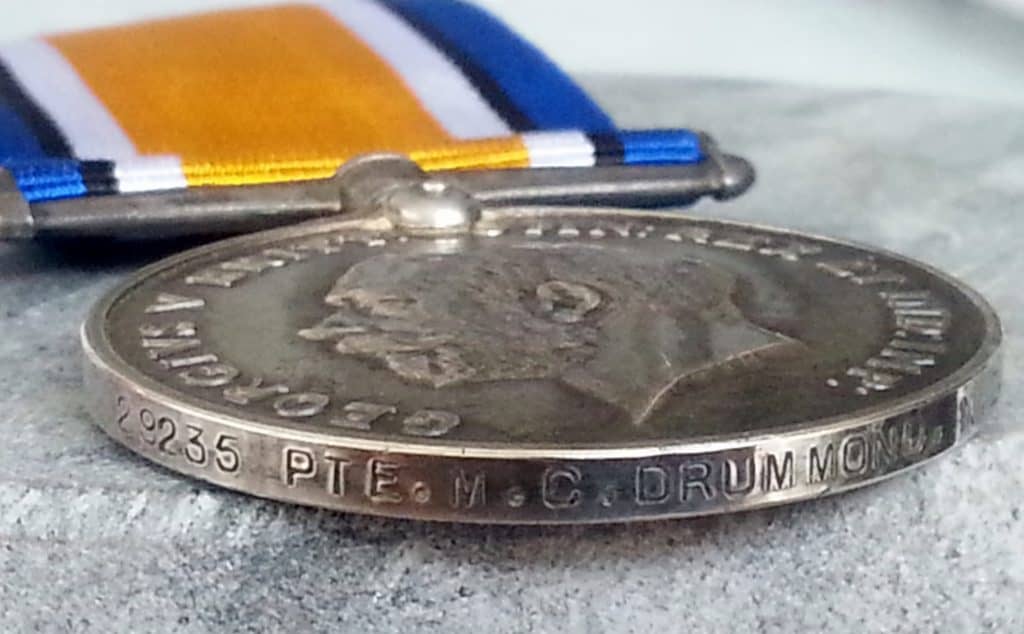