Lionel Richard Wood Matthews was born in New Plymouth in 1879.  In his early working life Lionel and his sister Effie had shared a house at 11 McFarlane St in Mt Victoria, Wellington.  Lionel was a self employed cabinet maker, and, at age 38yrs was typical of the age group being called up for war service toward the end of the war to make up the rapidly dwindling numbers on the Western Front.  Lionel was enlisted on 01 May 1918 in Wellington as Rifleman Richard Wood MATTHEWS – 40th Reinforcements, New Zealand Rifle Brigade (NZRB).  He served overseas for a total 294 days until being discharged from the NZEF on 27 May 1919.

Rflm. Matthews was beset with health issues from his time aboard the troop transport ship SS Tahiti.  He contracted Influenza (a worldwide epidemic at the time) and was transferred to Cannock Chase Military Hospital upon his arrival in England.  From there he was sent to Brockton Hospital, on to the Convalescent Hospital at Hornchurch, and finally back to the Depot at Codford once he was again fit for war service.  Regrettably he then had Tonsillitis and was again admitted to No 3 NZ General Hospital at Codford.  Overcoming this setback, Rflm. Matthews was discharged but not for long.  He was again to be afflicted this time by a bout of Bronchitis, which was followed shortly thereafter by Rubella (German Measels).  Rflm. Matthews was yet again re-admitted to No 3 NZ General Hospital, then back again to Hornchurch for a period of convalescence.

Through no fault of his own, Rflm. Matthews had spent approximately eight months of his war service either in hospital or in recovery.  After recovering sufficiently to travel back to New Zealand, Rflm. Matthews was discharged from the NZEF and he moved from Wellington to Hope in Nelson with his sister Effie, living there with a widowed relative, Mrs Wilhelmina Matthews.  Despite his wartime health issues, Lionel took up farming on his return and worked his “Larkhill” farm for the next 40 odd years.  Lionel never married and died at in Nelson on 07 April 1959, aged 80 years.  For his period of war service in the NZEF (and suffering I would suggest), Rflm. Matthews was awarded the British War Medal and presented with an illuminated Certificate of Service.  His sister Effie C. Matthews, whom also never married, retired in Nelson and before her death in 1965 Effie presented her brother’s medal to the Nelson RSA for safekeeping. 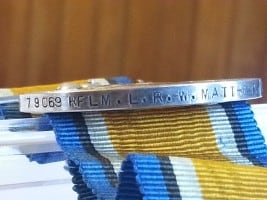 To find a relative of this particular Matthews family after a first, second and third review of available information continued to draw a blank.  I had found a (Papers Past) article referencing a William Matthews who had been a land owner in New Plymouth during the late 1800s.  The land had been left to “Lionel & Effie” and a 1909 advertisement in the NZ Herald listed the transfer of land to them both.  The land was occupied by a “tenant” – Emily Sarah Matthews, their mother, whose maiden name I soon determined had been “Wood”.  The reference to ‘Wood’ being one of Lionel’s christian names was now clear.  As luck would also have it, during a subsequent search for New Plymouth Matthews family references, I found a historical Rootsweb post (dated 2003 !) by Joanna B. requesting descendants of Richard and Alice Matthews  – parents of William, and father of Lionel and Garnet – to make contact for an anticipated reunion.

Armed with these pieces of information I felt sure I was on the right family track so I immediately contacted Joanna to confirm my information.  The name ‘Stafford’ had featured prominently in some of the names listed – one I recognized as being that of Lionels’ brother – Garnet Stafford Matthews, and those of Garnet and Mary’s two sons, Donald Stafford and Ian Stafford Matthews.  Garnet had died in 1948; his eldest son Donald died unmarried in 1957, leaving only Ian.  Fortunately Ian and Joy’s marriage resulted in the birth of their son – David Ian Stafford Matthews – the great-nephew of Lionel Richard Wood Matthews, and the white pages soon confirmed David’s location in Auckland.

Joanna confirmed my conclusions and offered to pass my information to David as he was not contactable on email.  David soon telephoned me and in short order had provided me proof positive that he was indeed the great-nephew of 79089 Rflm. Lionel Richard Wood Matthews.  The medal is now in David’s hands.

My grateful thanks to Joanna for following up and making contact with David, without whom Rflm. Matthews’ medal may have remained unclaimed from the Nelson RSA.