A Queen’s South Africa medal named to 5463 Trooper Joseph Norman Braund with original ribbon and two of the three entitled Clasps still attached, has been reunited with the son of the original recipient.  Joseph Wilfred (ka ‘Wilf’) Braund of Auckland received a surprise phone call from me two months ago advising him that I had become aware of the location of a Boer War medal that had been awarded to his father, Joseph Norman Braund. 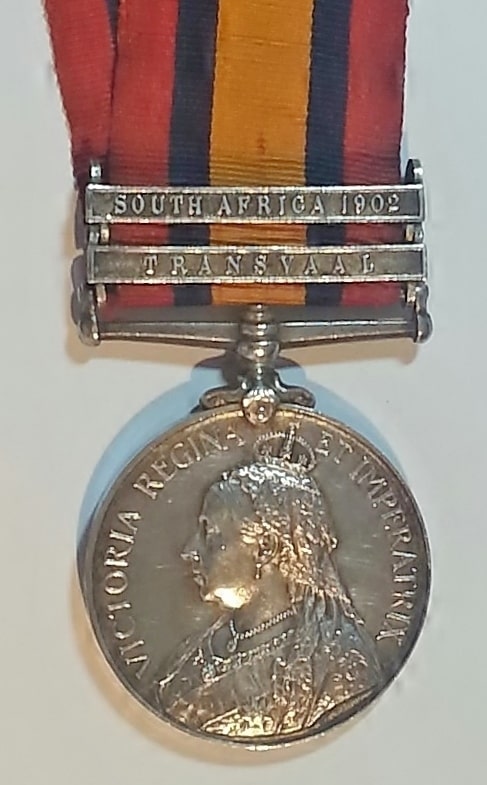 The ‘Braund’ name was/is well known name in Auckland in both early shipping and sporting circles, particularly during last century. Captain James Braund was a native of Colebrook, Devonshire, born in 1829 who embarked on a sea-going career at a very young age.  By the time he had turned 18 years of age he was a Master Mariner.  James Braund married Mary DENNETT of Lustleigh, Devonshire in the fledgling port of Auckland in 1858 and raised a family of five children.

Capt. Braund had started trading out of Auckland to the South Sea islands from around 1857 with the 100 ton cutter Surprise which he bought out from England.  Over his seagoing life he acquired a number of ships that were engaged in the coastal trade and became a widely respected sailor for his seamanship skills.

Mary Dennett Braund died unexpectedly in 1872 and with five young children to be cared for the sea-going Capt. Braund needed help to raise the family.  James married for a second time in 1874 to another ‘Mary’ – Mary Ellen HORNE, a Scottish lady from Rushy Hill, Cadder in Larnickshire, Scotland.

Not only did Mary Ellen Horne have James and the late Mary Dennett’s five existing children to care for but the addition of their own three – Mary Ellen (jnr), Albert Edward and Joseph Norman Braund – added to their brood and therefore her work load when James was at sea.

The Auckland Star dated 9 Feb 1897 carried the report that Capt. James Braund had died at 68 years of age of “.. apoplexy after climbing onto the roof of his house to supervise repairs being carried out by a carpenter….”  The number of children at home with Mary Ellen by this time was reduced to approximately five – two of James and Mary Dennett’s children, and the three of Mary Ellen’s and James.  The older children of James and Mary Dennett Braund had decided they wanted to return to England and live and so made their way back to Devonshire.  At the time of his death Capt. Braund was one of the oldest shipmasters trading out of the port of Auckland. 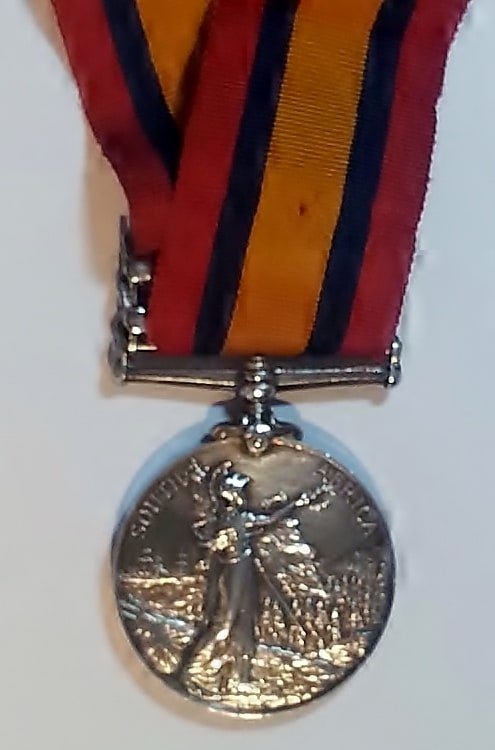 Joseph Norman Braund had been born at home in Grafton Road in 1878, the youngest child of James and Mary Ellen’s family.  Joseph was working as a plumber from the late 1890s at the time the NZ Government committed to provide troops for the 2nd Boer War in South Africa (also known as the Anglo-Boer War or South African War).

This was a war between Britain and her Empire against the Boers of South Africa.  The Boers were made up of combined forces of the South African Republic and the Republic of the Orange Free State.  The Boer Republics wanted Britain gone from South Africa and so declared war upon the English residency on 11 October 1899.

New Zealand’s contribution initially was a 215 man contingent of Mounted Riflemen drawn from the ranks of the serving and Volunteer Forces (Militia).  Later contingents (there would be 10 in all) would  be supplemented with civilian volunteers.

Seven contingents had been sent to South Africa by December 1901, six having returned to new Zealand after their tour of duty.  In January 1902 whilst the 7th Contingent was in South Africa, England requested an additional contingent for the war.  Unlike the previous contingents however, the men were not required to be members of the Volunteer Force.  4000 young and older New Zealand males applied but only 1000 were accepted.  23 year old Joseph Braund who had formerly been a member of the 1st NZ Native Rifles (a voluntary militia unit based in Auckland), had volunteered and accordingly was one of the 1000 selected.

The 8th Contingent was to have a relatively short period of war service.  The ‘Peace at Vereening’ Agreement was signed on 31st of May thereby officially ending hostilities after 2 years and 8 months of a protracted guerrilla-style war.  Trooper Joseph Braund and the 8th Contingent sailed for home on 05 July 1902.

Joseph Braund returned to Auckland and his plumbing work, initially returning to the family home in Grafton Street with his brother Albert and sister Mary Ellen.  By 1914 Joseph had a new job, that of  Tally Clerk  and in September married Elizabeth Ella SNOOK of Dovedale, near Nelson.  Joseph and Elizabeth made their home in Parliament St and had two sons, Joseph Wilfred and Laurance Alan Braund who also followed their father into the Clerk trade.

Joseph Norman Braund died at Remuera Auckland on 18 Feb 1952, aged 73, and is buried in the Purewa Cemetery, Auckland, and Elizabeth passed away in 1970.

Ancestry Family Trees was my primary source of answers for this search and from this I was able to contact the Auckland based descendant Braund family.  Few Braund family members had moved away from the Auckland area since the mid 1880s and as a result my first telephone call put me in touch directly with one of Joseph and Elizabeth’s two sons.  Wilfred Joseph Braund (ka ‘Wilf’ – widower, retired) still lives in Remuera which is essentially the seat of the Braund family that his grandfather and mother, Capt. James and Mary Ellen Braund established in 1850.  Wilf is now 87 years young.

Wilf’s brother Laurance Braund is deceased and as the remaining son of that generation Wilf (and his son James) was able to confirm details of his ancestry and descent from his father Joseph Norman Braund as well as the details of the Braund family’s early shipping and residential history in Auckland.

Wilf told me his father’s Queen’s South Africa medal had been missing for many years; no-one in the family could actually pin down when or where it might have been misplaced.  My news of the medals re-appearance after passing through the hands of numerous temporary owners was a great surprise to Wilf.  Happily, Wilf  has now been reunited with his father’s Queen’s South Africa medal.

The reunited medal tally is now 134. 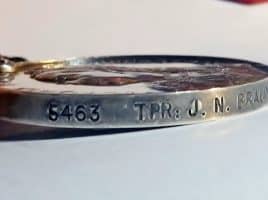 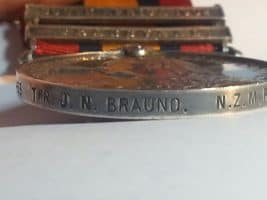