Max J. of Asburton contacted me in November 2015 requesting help to reunite a set of WW2 medals he had acquired a couple of years ago.  He had decided to try to reunite them with the soldiers family and to that end had attempted research of the soldier and his family but without much success.

As many of you will be aware WW2 medals were issued unnamed and so, if not privately engraved or accompanied by another item that could confirm attribution, the likelihood of knowing to whom they originally were awarded to is nigh on impossible to determine.  Fortunately the medals were also accompanied by a set of identity discs (‘dog-tags’) and an RSA badge which was also engraved with the soldiers regimental number.

Max had identified 360362 John Russell, a farm manager of Makairo, Pahiatua in a WW2 Ballot Lists 1940-45 but could not be sure that 45743 Private John RUSSELL as identified on the dog-tags and RSA badge, was the same person.   Without accessing Pte. Russell’s military file (most WW2 personnel files can only be obtained on request and by payment of a fee from NZDF Personnel Archives) Max was stuck and so decided to send us the medals to continue the research for family.

I located the 2 NZEF Ballot Roll and cross referenced it with the Embarkation Rolls which contained sufficient information for me to confirm that 360362 and 45743 john Russell were one in the same person, and clearly linked the medals Max had sent with the regimental number imprinted on the dog-tags and RSA badge.  Pte. Russell had been assigned to an “Inf Bde” and embarked for Egypt in July 1941.  I also extrapolated from “Inf Bde”, theballot and embarkation dates that Pte. Russell had been enlisted into the 20th (Infantry) Battalion Reinforcements that was largely made up of Otago & Canterbury personnel which formed part of 4 Brigade, the 2nd NZ Division of 2 NZEF.  20 Battalion had been heavily involved in the Greece and Crete campaigns and having lost over half their compliment dead or wounded, had been evacuated to Egypt to  re-built back up to strength for the upcoming “Operation Crusader” which was to be launched in November 1941.

Perhaps fortunately, Pte. John Russell would not take part in this battle.  Not long after his arrival in Egypt in October 1941, he had been hospitalized with Enteric Fever (now known as Typhoid).  As a result he had been assessed as being “no longer physically fit for active service” and as a consequence was invalided back to New Zealand in December.

I also checked Pte. Russell’s next of kin listing – his father, David Russell, originally from Cumbernauld Glasgow, and John’s older sister Elizabeth also born in Glasgow, were residing in Cannon Street, St. Albans Christchurch – no mention of his mother Elizabeth whom I later discovered in a Papers Past obituary entry had died in 1943.

Tracing Pte. Russell’s movements after his return from Egypt was problematic since there was very little official information that mentioned him.  Given his age I managed to narrow down his birth to one of three “John Russell’s” with 11 November 1908 being the most likely.  No other records of residential movements, jobs, marriages or even his death could be located – it seemed our John Russell had vanished except for one 1946 Electoral Roll reference to a “John Russell at 182 Worcester Street, Christchurch”.  With no other links to ascertain if this in fact was the John Russell I was looking for, I decided see if his older sister Elizabeth (“Betty” as she was known) could shed any light on her brother and their family.

I managed to trace John and Elizabeth’s father David back to Glasgow; Elizabeth  being born in there in 1891.  She had lived with her parents briefly and at various other addresses around Christchurch working as a “Domestic Servant”.   A marriage entry in Ancestry for Elizabeth Simmons in 1929 to a Dr. Stewart Hunter (gynaecologist), son of Dr. Hugh Hunter, showed their residence to be 182 Worcester Street, Dr Hunter’s home and surgery.  Here was a connection to the 1946 Electoral Roll entry for John – it appeared he had been living with the Hunters since his return from North Africa until about 1949.  Thereafter, no further written references to this Pte. John Russell.

As I pursued Elizabeth’s life to try and re-locate John, it transpired that her husband had also served, being commissioned into the NZ Medical Corps (home service). 602256 Colonel Stewart Hunter had died prematurely in 1957.  As a result, Elizabeth apparently unable to cope and in 1962 at age 71 years, committed suicide.  Elizabeth’s Will we found in an on-line probate record which confirmed she and Stewart had had no children, however her estate was dispersed among a number of Elizabeth’s siblings and other relatives. This was a breakthrough – it appeared John and Elizabeth had three other brothers !

References to the Russell brother’s  I located in the Electoral Rolls which showed all had lived in the Christchurch/Manawatu areas (one of whom had been an RNZAF fighter pilot during WW2).  John Russell had been specifically mentioned in sister Elizabeth’s Will however gave no indication that he had been married or any indication of where he may have been.  This meant I was still struggling to pin John’s location down.

I was about to tackle the research of John & Elizabeth’s three brothers (all of whom were deceased) to locate an appropriate living descendant when I uncovered an Ancestry Family Tree which included a reference to Stewart & Elizabeth Hunter.

The tree’s author was Jackie Hunter-Letham of Methven whom had posted a number of questions on an Ancestry Message Board relating to the Stewart Hunter ancestors.   An email and phone call to Jackie revealed that Jackie had a friend Jan C. who new John Russell’s step-daughters !  John Russell had married Grace Dorothy WEIR (nee Helmore) in 1949 and they had resided in Christchurch since that time.   However I could find no record of their marriage, either in BDM records nor elsewhere in publicly accessible official sources.  Jackie told me Grace Weir, a widow of Fendalton, had a family of two daughters – Alison Mary and Shirley Morag, by her first marriage to John Grainger Weir, a Scottish stockman and farmer who had sadly died by his own hand in 1938.   Jackie said that both of John’s step-daughters were living in Christchurch.  As a result Jackie put me in touch with the younger step-daughter – Alison Mary CHAFFEY.  Alison and John Chaffey had farmed in the Waiau area for many years until eventually retiring to Christchurch – their son continues to farm the family property at Waiau.

I rang Alison whom was able to fill me in on much of the detail above. Alison’s memory of her step-father John was that of a very practical man, an excellent gardener but a solitary somewhat isolated man who had had been deeply affected by the death of his brother Bill and his mother just prior to his departure to the war.

It soon became obvious to me after listening to Alison that John’s early years, his long single life, roving farm labouring work until he married and settled in Christchurch, together with health issues had probably contributed greatly to the lack of official records such as censuses, marriage records and electoral rolls – one of the main reasons it had been so difficult for me to reconstruct John Russell’s life post WW2.

John had apparently become a very bitter man after the war.   As an experienced farmer/farm manager and being a WW2 veteran, John would have essentially met the criteria to have been entitled to “economic rehabilitation assistance” from the government in the form of a re-settlement farm.  For some reason he had been denied this, possibly because he was invalided home after only a few months overseas ?  The government and the RSA had been of no help to John in resolving these issues and so he was forced to find interim work farm labouring and working on his brother-in-laws farm back in Pahiatua.

After marrying Grace Weir in Christchurch, John re-located to the city and secured work as a clerk variously at Amuri Motors, and Gough, Gough and Hamer, a farming machinery importer and retailer.

Apart from his long, and slow recovery from Typhoid, John had continued to struggle with his health since returning to New Zealand.  Unknown to Grace and the girls John had sustained a back (spine) injury whilst overseas and this injury slowly manifested into crippling back and leg pains.  A belated operation proved to be of little help and in his later years he suffered partial paralysis of the legs making movement very difficult – the damage had been done and unfortunately had not been properly attended to at the time.  John battled on to provide for his family but his back problems dogged him particularly during the last 20 odd years of his life.  To make matters worse John also suffered a stroke.  John’s wife Grace died in 1975 at age 71 years which meant that his two step-daughters, Alison and Morag, effectively became his full-time carers for the remaining five years of his life.  Alison thought  John’s collective circumstances and subsequent disabilities made for a man who felt less than fulfilled, had become very moody and somewhat neurotic as he struggled with the daily routines of life.

45743 Pte. John Russell died in Christchurch at 71 years of age on 19 November 1980.  His ashes were scattered at the Harewood Crematorium and no plaque for him exists.  This fact also accounted for the lack of records in either any cemetery RSA Section database, or of cemetery headstone/burial plot records.  Only the crematorium concerned and Internal Affairs BDM records (death cert) have this information – fortunately I did not need them as Alison had confirmed John’s ultimate fate.

My thanks to Max for sending me the medals.  I will be meeting with Alison next week in Christchurch to hand over John’s medals, dog-tags and his official RSA badge.

Footnote:  In talking with Alison Chaffey I was delighted to learn that her husband John Chaffey had been the initiator and driving force to finance and install a statue to honour Captain Charles Hazlitt Upham, VC and Bar – which can be seen on State Highway 1 at Amberley, North Canterbury.

Also that one of John Chaffey’s forbears, Colonel Ralph Anderson Chaffey, V.D. had a long and distinguished military career in New Zealand as the Officer Commanding, Canterbury Military District, and as an Honorary Aide-de-Camp to the NZ Governor General, during World War 1.

The reunited medal tally is now 68. 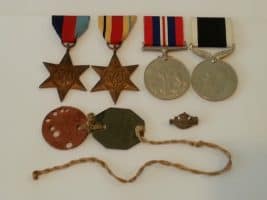 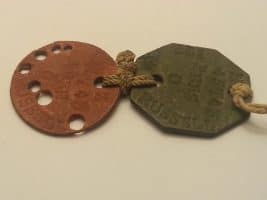 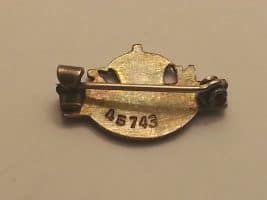