A medal found by Brent W. in a burnt out Wellington house in the late 1960s has finally found a home.  Being the curious schoolboy he was, Brent riffled through the remains of a house that had recently been raised by fire in the vicinity of Rhodes & Horner Streets in Newtown.  In the remains Brent found a British War Medal which he held onto ever since.  The medal was named to 284276 James CARROLL, S.P.O. (Stoker Petty Officer), Royal Navy.   Brent read of MRNZ’s work and sent the medal to us to try and reunite it with family.

James Carroll was born on 01 November 1877 in Rhamore, the middle son of five siblings, to Patrick & Ellen Carroll of Aghamore, Co Kerry, Ireland.  James joined the Royal Navy and was serving aboard HMS FLIRT when on the evening of 26/27 October 1916 whilst patrolling the Dover Straits the old destroyer was sunk by gunfire from a German torpedo boat.  Of the 66 crew members, only six survived.  These six were men who had been lowered in a boat to pick up men in the sea from another sunken ship, WAVENEY II.  Regrettably, James was not among the six. He was 35 years of age.

I established James’ Irish origin from Royal Navy Roll of Honour and commemorative inscriptions on two naval war memorial records.  S.P.O James Carroll is listed in the Dover Patrol Book of Remembrance, and with no known grave he is also listed on the Portsmouth Naval Memorial, UK.

A check of Ancestry and BDM records showed Margaret Carroll had married Bartholemew Sheehan in 1903, a farmer of St Andrews, and an Electoral Roll of 1911 listed James Carroll as a barman in Omarama.  Another Papers Past death which had been placed by Margaret in 1916 revealed brother David had died as the result of a drowning accident in Wellington Harbour (a fall between ship and wharf).

A scan of the White Pages showed the Sheehan name was still associated with the Waitaki region and after a phone call to one of two Sheehan families near Fairlie, I confirmed that Margaret’s grandson  Kevin Thomas Sheehan (and wife Kate) to be living on the Stanton Station at Kimbell.  The medal will be sent to James’ great nephew Kevin this week.

Our thanks to Brent for sending in the medal.

The reunited medal tally is now 40. 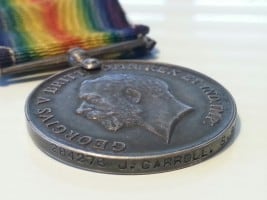