Jim & Paula S. of Kerikeri are the very proud relatives of their uncle, 206384 Captain Robert Murray Reston, Military Cross (Korea), Royal New Zealand Artillery.  When Paula’s uncle Murray died she set about complying with her uncle’s last wishes for his medals to be passed to the National Army Museum at Waiouru.  Along with Capt. Reston’s own WW2 and Korea service medals Paula discovered a WW1 Victory Medal named to 12113 SGT Gordon Edwin ANDERSON.  The name meant nothing to Paula or Jim so they retained the medal and even went so far as to have, in Paula’s words “… the rather tired and tatty ribbon replaced with a new one (done by professionals) …. and from there the medal just remained in one of our drawers for several years until we came across Medals Reunited earlier on last year.”  Did Capt. Reston know Sgt Anderson ? – possibly, but we will probably never know.

Gordon Edwin Anderson was born in Nov 1888 at Ponsonby Auckland to parents William Anderson and Ann, nee Buchanan.  Initially a farm labourer Gordon later trained as a bank clerk and was employed with the Bank of New Zealand in Stratford from about 1911 until he was called up for military service in Feb 1916 with the 3rd Battalion, Auckland Infantry Regiment.

By June 1916, Pte. Anderson had embarked for Egypt with the 3rd Reinforcements of the New Zealand Rifle Brigade and would spend the next three years in action on the Western Front, part of that time attached to the 2nd Australian Tunnelling Company.

Pte. Anderson was severely wounded by a gunshot to the back of his skull in November 1917 which meant automatic evacuation to England for treatment and recovery at 1st NZ General Hospital, Brockenhurst.  Gordon would no doubt have benefited during his recovery from the presence of his sister-in-law Nurse Cora Beattie Anderson, who was serving with the NZ Army Nursing Service.  Gordon made a successful recovery and during this time was introduced to a Scottish lass from Edinburgh, Marjory Craig, whom he married in London in 1919.

My search for Sgt. Anderson’s descendants started with the Taranaki and Auckland Electoral Rolls which confirmed his pre and post war movements.  From these I also ascertained Gordon and his wife had two daughters Marjory Glen Anderson (married John LEE) and Gwen Christian Anderson (married Henry James REID).  Marjory was deceased however all my indications were that Gwen may still be in the area.  A further check of Birth records and check of Ancestry family trees confirmed a son Graeme to Gwen and Henry was still living in Taranaki as of 1981.  Graeme had also appeared on a family tree of a Taranaki Anderson family so I posted several requests for contact on-line.  Within a week I received an email from one of Gwen Reid’s grandson’s – Matthew.  Matt confirmed that his uncle Graeme was in fact Gwen’s eldest son, Sgt Anderson’s grandson …. and the even better news was that Sgt. Anderson’s only surviving daughter Gwen was also living close-by.

Graeme contacted me this week and was able to confirm details of the family’s ancestry – mother and son will shortly be reunited with Sgt. Anderson’s Victory Medal (we will keep looking for the other half of the pair – his missing British War Medal).

Thanks to Jim & Paula for taking such special care of this family heirloom, and for contacting MRNZ for assistance to find the family.  Thanks also to our part time researcher Julie, and to Matt for his sharp eye and prompt response to my request which ultimately linked me to Graeme and his mother Gwen.

The reunited medal tally is now 38. 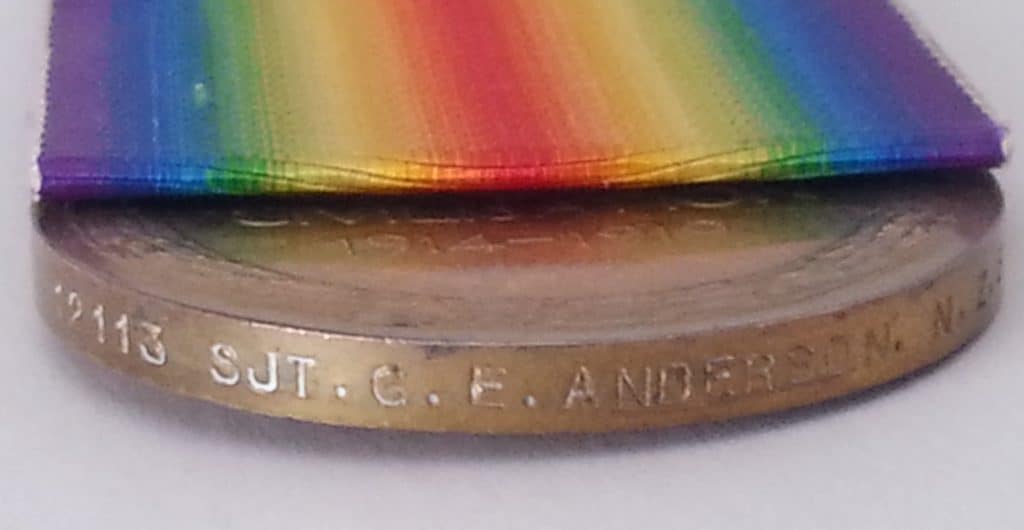