An email from Frank L. of Kerikeri advised us that a box of “junk” that had been donated to the Kerikeri RSA a couple of years ago for a jumble sale, was found to contain a WW1 British War Medal (minus ribbon) named to a former Kerikeri resident – 12/1968 PTE. G.E. GUILDFORD NZEF.

The RSA management had attempted to find relatives over the ensuing two years but ultimately had drawn a blank.  It was at this point that Frank contacted MRNZ to assist in the hunt for Geralds’s descendants so the medal might be returned to his family.

** Note: the spelling of “Guildford” and “Guilford” has been used variously by Gerald’s parents James and Kate, as have other numerous subsequent descendants. Gerald’s wife was buried in 1967 as Margaret Grace GUILFORD, his uncle Henry John left a written diary and used GUILDFORD, and Gerald’s daughter was buried Mona GUILFORD Wikaira.  All references to Gerald including his military records use GUILDFORD which I have used throughout when referencing Gerald although the definitive spelling of this family name may still be open to debate.

Gerald Edgar (ka Joseph) GUILDFORD was born in Pleasant Valley Geraldine in 1879, the son of farmers James and Catherine (Kate – nee LYNCH) GUILFORD.  Gerald worked as labourer in and around Canterbury gradually migrating northward.  In June of 1913 he married Margaret (Maggie) Grace THOMPSON of Kihikihi, in Te Kuiti and together they had only one daughter, Mona.

At 34 years of age, Gerald was living in Te Kawa in the Taumaranui area when he was enlisted for military service in January 1915 with the Auckland Infantry Regiment, 4th  Reinforcements.

Pte. Guildford embarked for Cairo in Apr 1915 for battle training before joining his battalion on the Gallipoli Peninsula on 08th of June.  On 18 August Pte. Guildford was casevaced with severe “shell shock” to the 16th Casualty Clearing Station .  By September he was also suffering from dysentry and was hospitalised at the NZ General Hospital in Cairo, and then to the 19th general Hospital in Alexandria.  The impact of these two conditions on Pte. Guildford lead to him being invalided back to New Zealand in October 1915 and subsequently discharged “no longer physically fit for active service” in January 1916 after 193 days foreign service.

For his service Pte. Guildford was awarded the 1914/15 Star, British War Medal and the Victory Medal.

When he was well enough, Gerald returned to farm work with his whanau in Kumeora, Hawkes Bay.  Over the next 10-12 years he drifted from job to job working on farms in Whangarei, Frankton and the outer Auckland area.

Tragically Gerald died on 29 August 1937 as the result of a fractured skull after falling from his bicycle in Campbell Rd, Ellerslie.  Gerald was 56yrs of age and is buried in the Serviceman’s Section of Waikumete Cemetery in Henderson.

A search of Electoral Rolls showed that Gerald’s wife Margaret had died in 1967, and since Mona and her husband had also deceased, I had little family left to go on.  A scan of Ancestry provided a Family Tree that contained Gerald which had been constructed by a Mark ‘Guilford’.  I contacted Mark who responded with several pages of family research – brilliant!  Mark’s information showed me that Mona and her husband David (Rawiri) WIKAIRA had had a family of four sons – the added bonus being that Mark had sent pictures of Gerald in uniform c1916, also Moana and David Wikaira. Mark as it transpired was Gerald’s great-great nephew.

Reckoning on the fact that the youngest of the Wikaira boys if still alive, would now be in his mid 60s, I started my search with the Electoral Rolls which confirmed Rea Geoffrey Wikaira was living in the Waikato in 1981 – the limit of the records.  Next I went to Facebook – what a great tool this has become for researchers – luckily I found Rea Wikaira, ONZM, JP of Waiheke Island and so was able to make contact.  Rea confirmed that Mona Guilford Wikaira, QSO, JP was his mother and therefore Gerald Edgar Guildford was his grandfather.

Gerald’s British War Medal will shortly be on its way to Rea who will now be able to replace of at least one of the three replica medals he has been wearing in memory of his grandfather on Anzac Day and Remembrance Day.

Pte. Guildford’s 1914/15 Star and Victory Medal remain missing – if you can assist in locating it we would be pleased to hear from you.

My thanks to Frank for sending us the medal, and to Mark for the family material and photographs.

The reunited medal tally is now 47. 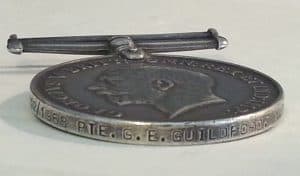