A Victory Medal found in the effects of a pensioner who had died alone in a Christchurch flat was reunited with the recipient’s  descendant family this week.  The Victory Medal was one of three medals together with a Memorial Plaque and Scroll that had been sent to Sgt. George Dines’ parents in Fairlie, South Canterbury.  Was it is possible that George Dines and the late Alf Kimberley knew each other?  Maybe they had served together overseas, or could Mr Kimberley simply have found George’s Victory Medal – a second-hand shop, at a market or the like – we will never know. 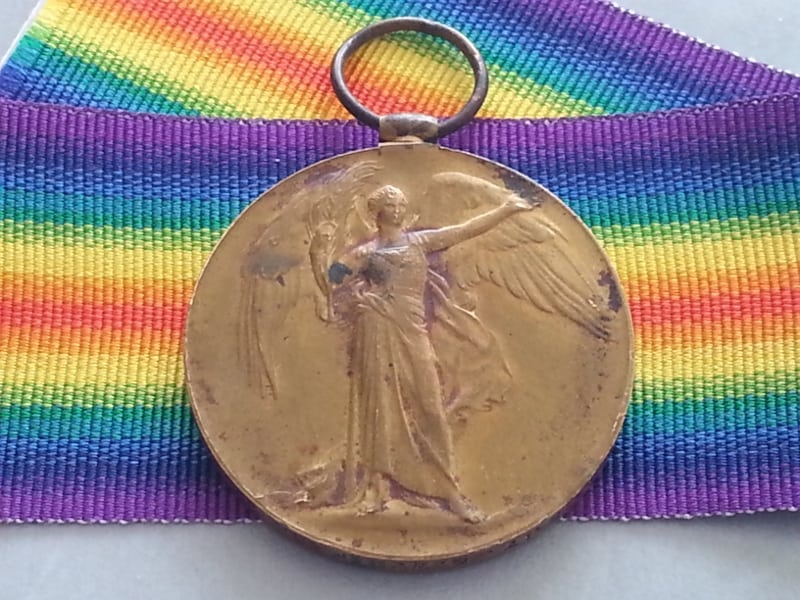 The TV One ‘Good Sorts’ programme that aired in May this year and featured our work of returning war medals to families, and a conversation between grandson and grandfather, were both instrumental to the successful outcome of this case.

Cameron is a senior student at the John McGlashen College in Dunedin, the son of champion NZ blade shearer Tony Dobbs and wife Julie from Fairlie.  During a recent home visit Cameron had called on his grandfather Arthur B. Dobbs (known as Barrie) for a bit of chat.  One of the topics of conversation had centred around the commemorations that were being observed around the country as part of the four year period of remembrance to coincide with the 100th anniversary of the four years of WW11, 1914 to 1918.  Specifically they chatted about the services to observe the various key battles in which New Zealanders had taken part, in France and Belgium.  Grandfather Barrie happens to live almost next door to the Fairlie Primary School which has, positioned just inside the front gate, a memorial flagstaff that was donated by the South Canterbury Education Board in 1917 and which bears the names of former pupils who had served and/or died during the First World War, on a plinth at the base of the pole.  To this day, the school memorial remains the only First World War memorial to the Fairlie men who did not return.  A larger, more recent stone structure graces the centre of town and commemorates Fairlie men who have made the supreme sacrific in all conflicts since WW1.

During their conversation Barrie happened to mention to Cameron that George Dines was his (Barrie’s) great-uncle, and that his name was on the memorial.  Cameron was fascinated and having worked out that he was George’s great-great-grand nephew, wanted to know more.  George had left his home town in 1915, one of the many freshly trained and prepared soldiers anxious to join the fight for King and Country on the other side of the world.  As the train pulled out of the Fairlie Station for Timaru, the Dines family and friends gathered on the platform, wished George ‘God’s speed’ and ‘safe travels’ as they waved him goodbye through their tears, a scene repeated at stations and sidings all over New Zealand.  The sight of the train and George’s family and friends disappearing into the distance was the last they would ever see of each other.

Not long after their discussion, Cameron happened to see the ‘Good Sorts’ program that aired on TV One on May 28th which featured the work of Medals Reunited New Zealand.  Cameron followed this up and had taken a look at our website and in particular the Medals ~ FOUND page.  To Cameron’s great surprise he discovered that we were looking for a descendant of the very same person his grandfather Barrie had spoken of, his great-uncle George Dines.

George and John Dines had an older sister in Lillian Maud DICKSON and two younger sisters, Flora Richmond HAY and Grace Elizabeth GRIEVES.  The Dines name was well known in and around the Fairlie region in the early part of last century, as the families  were numerous and predominantly engaged in farming families – today, the Dines name does not exist in the district.

George Dines (jnr) was schooled at both the Fairlie and Kimbell Primary Schools.  The Kimbell is now a museum and is located about 10 km west of Fairlie on the Fairlie-Tekapo highway.  Apart from his father’s farm, George Dines and his brother John had worked on various others in the district.  From an early age George had shown a particular interest in the various items of mechanical and motorised farming machinery that had started to appear on farms.  Following his schooling, George extended that interest to become a motor mechanic at Jones & Laing’s one and only garage in Fairlie.  As for military experience, George’s school like most others of this time had a corps of Senior Cadets (Junior Cadets, 12-14 years had been scrapped in 1911) who received basic military skills and discipline training.  All boys aged 14 to 17 years were required by law to undertake the training.  The Senior Cadet system was designed  to feed into the General Training Section (18-21 years), until being in taken into the Reserves from 21-30 years.  You either loved it or hated it!  As it happened George took to it like a duck to water.  Once he had finished his schooling he maintained his military interest by joining the 2nd South Canterbury Regiment, a mounted territorial unit in which he served for nine months prior to answering his King and Country’s “Call to Arms”.

23/38 Rifleman George William Dines was 20 years of age when he  enlisted in the NZEF on 27 April 1915.  His prior experience resulted in his immediate appointment as a Temporary Sergeant in ‘A’ Company of the 1st Battalion Trentham Regiment whilst undergoing basic training at Trentham Camp.  George obviously proved he was capable of handling his temporary rank and so retained it.  On 19 October, Sgt. Dines and the forty nine other members of the 1st Battalion, NZ Rifle Brigade’s Advance Party embarked on to HMNZT 29 Waitemata at Wellington and sailed for Suez.

It was mid December 1915 when the Waitemata arrived at Suez where the Brigade disembarked to await further orders.  On 20 Dec the Brigade re-embarked for Marsa Matruh on the Mediterranean Coast, about 210 kms east of Alexandria, a distance of only about 250 kilometres however the Brigade was not disembarked until 17 February 1916 – almost a month waiting at sea!  Here the Brigade would stay until April 6th, 1916 by which time the unit had been re-designated the 3rd NZ Rifle Brigade (3/NZRB), and once more embarked, this time for France.  After some orientation and training at the NZ Reception Camp at Etaples, the 3/NZRB moved into the line to prepare and rehearse for their first major offensive action which would be the Battle of Flers-Courcelette on 15 September 1916.  It would also be the first battle in which tanks were used on the battlefield – the British Mark I “Male” tank.  The 3/NZRB took Flers Trench and Flat Iron Trench after being held up by barbed wire entanglements until a tank arrived to help.  Being a new concept in trench warfare, the use of tanks to support infantry produced mixed results; many broke down, but nearly a third succeeded in breaking through.

At the end of the first day of battle, Sgt. George Dines was listed as one of the many New Zealanders who had been reported “missing, believed killed”.  Sgt. Dines’ body was never found and a subsequent Court of Inquiry convened to investigate the circumstances of all unaccounted soldiers had declared him to have been Killed In Action on 15 September 1916.  Sgt. Dines was 22 years of age.

23/38 Sgt. George William Dines has no known grave.  His service and sacrifice is commemorated on the Caterpillar Valley (New Zealand) Memorial, Caterpillar Valley Cemetery, Longueval, Somme together with 200 other NZ soldiers who died in this battle.

7/39 Sgt. ~ Lt. John Henry Dines  was George’s twin brother and somewhat more fortunate than his brother. Also a farmer at Fairlie, John had been called up for service well before his brother, enlisting on 16 Oct 1914 at Timaru.  John had joined the 10th Squadron of the Canterbury Mounted Rifles (part of the Main Body which would embark with the first units for the front).  As is now known instead of heading to England and France, these units were re-directed to Egypt for preparatory training prior to the Gallipoli Landing on  25 April 1915.  After gong ashore at Gallipoli Sgt. Dines managed to remain injury free until a gunshot wound to his chest during an assault on Hill 60 on 26th August 1915 bought him down.  He was evacuated to NZ Stationary Hospital No. 1 at Alexandria, Egypt.  By the end of October he was fit enough to return to duty at the front.  It was decided to retain him in Egypt and so was promoted to Sergeant Major (WO2) of the CMR Mounted Training Regiment.  By August 1916 Sgt. Maj. Dines had been appointed the Regimental Sergeant Major (RSM) of the Canterbury Mounted Rifles in Egypt, with the rank of Warrant Officer, Class 1 (WO1).

WO1 John Dines undertook a commissioning course in London, returning to Egypt as a 2nd Lieutenant with the 38th NZ Mounted Rifles reinforcements in October 1917.  Promoted to Lieutenant in Nov 1918, Lt. Dines was plagued with recurrent bouts of Malaria and so was invalided back to NZ aboard the HMNZT Devon in April 1919.  7/39 Lt. John Henry Dines was discharged from the NZEF in Dec 1919 after 3 years 320 days overseas, a total of 5 years 142 days of NZEF service.

That was not the end of military service for John Dines – 821076 Lt. John Dines re-enlisted at the age of 45 for service during WW2 in Nov 1939–Oct 1944.  Fit for Home Service only, he was first appointed a Company Commander in the 3rd Armoured Regiment, and was later promoted to Captain in the NZ Temporary Staff in his capacity as Company Commander of the Training Battalion at Burnham Camp.  Capt. John Dines NZTS married Gertrude PILBROW; he died in Christchurch in August 1973, aged 79 years.

The irony of this particular case is that some 10 years ago when whilst I was still serving, I decided to sell my collection of militaria that had accumulated over some 37 years of service.  Within my collection were three Memorial Plaques, one of which was named to John Henry Dines!  I was down to the last few items to sell which included a bayonet collection, so I advertised the lot on Trade-Me.  It was not long before a buyer rang me, a militaria enthusiast from Temuka or Timaru I seem to recall.  He drove up to my house in Waltham, was happy with the bayonet collection purchase and as we chatted about militaria generally, I offered him the Dines Memorial Plaque as a gift for taking the complete collection!  If only I knew then that I would be in the business of reuniting medals now, particularly having just returned George Dines’ Victory Medal to his descendants … hindsight is a wonderful thing isn’t it?

Cameron and his grandfather are thrilled to at least have George’s Victory Medal back at home in Fairlie.

If the gentleman to whom I sold my bayonet collection to in Christchurch around 2005, and to whom I also gave the Memorial Plaque (‘Death Penny / Death Plaque’) of John Henry Dines, should read this post I would greatly appreciate hearing from you.

In addition, should anyone know the whereabouts of the 1914-15 Star and British War Medal (or Memorial Plaque) named to George William Dines, Cameron and I would be most grateful for a phone call or email.

The reunited medal tally is now 167. 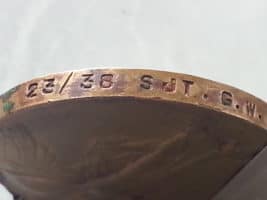