A recent email from Donna V. requested help with information to establish whether or not a relatives war medals were still in New Zealand and if they were, who may be holding them.

Fred Barron had never bothered (or resisted ?) claiming his WW2 service medals and it was not until after his death in 1983 that his widow Patricia Ada McSWEENEY (name not changed to Barron) applied for Fred’s medals on behalf of the family – these she duly received.  Since Patricia’s death in 2007 the whereabouts of Fred’s medals remained unknown.

6650 Pte. Frederick Christmas BARRON was born in Auckland in 1914, worked as an upholsterer and was drafted into the 19th Battalion, 2 NZEF in 1940.  Pte. Barron spent time with his unit fighting through Africa and later in Greece.  In May 1941 Pte. Fred Barron was reported “Missing”.  Two months later confirmation was received by HQ 2NZEF in London that Pte. Barron had been made a Prisoner of War.  He was interned in Stalag 18A, Greece.  Here he remained for the rest of the war until his release and transfer back to the UK in March 1945.  A rather emaciated by otherwise reasonably healthy Pte. Barron returned to NZ in September 1943.  Pte. Barron was discharged from the Army in January 1946. 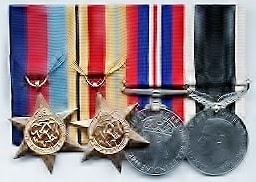 With the information MRNZ was able to provide Donna, Fred Barron’s medals were traced and confirmed to be in the hands of a direct descendant in Cambridge, New Zealand.

The reunited medal tally is now 132.