Ernest Joshua Harris, known as ‘Mick’, was born in April 1890 in Inglewood, Taranaki, the youngest of three sons – John Alfred and James David his elder brothers – to parents and Moa Street residents, John Alfred HARRIS, a tinsmith and Margaret Ann BEGGS.   By 1892 Margaret Harris had been widowed when Ernest was just 2 years of age.  Mrs Harris had quite a task ahead of her in those days to raise a family alone however she did and produced three well adjusted young men.  After their schooling was completed Mick Harris became a bicycle mechanic for an Inglewood cycle dealer, George Gudgeon.  His brother John became a plumber and James a bicycle agent (seller).  With the advent of petrol driven engines coming into general use, James also became a motor mechanic and following the war. an electricity linesman for the remainder of his working life.  In 1911 the rumblings of potential for hostilities was on the horizon and it was then that Mick Harris decided to join the local territorial miltia unit, the 11th Taranaki Rifles/Company.

Mick Harris was a keen cyclist as well as a very capable player for both the Inglewood Cricket and Hockey Clubs.  This photo of Mick was taken from a photograph of the Inglewood Hockey Club’s team photo just after they had won the 1912 Taranaki Hockey Championships, after an undefeated season.  Mick’s brother John was the captain of that team and brother James was also a member of the team.

Ernest ‘Mick’ Harris attested for military service in August 1914 and at the age of 24 sailed with the Wellington Infantry Regiment on 16 Oct bound for Egypt.  After their arrival on December 4th, the Wellington Infantry Regiment’s battalions went straight into rapid preparations for the as yet planned but undisclosed assault on the Turks at Gallipoli.

On 17 April 1915 10/881 Pte. Ernest Joshua Harris and fellow members the 1st Battalion became the vanguard for the landings at Gallipoli, the Wellingtons being among the first ashore on the 25th of April.  Pte. Harris survived the landing maelstrom and had barely settled into a routine when sickness overtook him.  He was evacuated to Mudros in July for a condition many soldiers were to become afflicted by – Enteritis – inflammation of the small intestine usually caused by eating and drinking food or water contaminated by bacteria or a virus, and also accompanied by severe diarrhea.  The conditions on Gallipoli  were not exactly very conducive for maintaining high standards of food or field hygiene and so steadily took an increasing toll on the New Zealanders.  Pte. Harris’s condition worsened to the extent that he was shipped on the Clan McGillvray to St. Andrews Hospital in Malta.  Being still in bad shape, by the end of August it was decided to place him on the hospital ship, HS Ascania, and send him back to England and 1st Southern General Hospital in Birmingham for specialist care.  There he remained for the rest of the year recuperating until he was finally deemed fit enough to rejoin the New Zealanders at their UK Depot. The TS Briton returned him to Alexandria to rejoin the 1st Wellington Battalion at Ismailia near the Suez Canal on January 23rd, 1916.

The Wellington Regiment had taken a fearful thrashing at Gallipoli, particularly during the operation to take Chunuk Bair which unfortunately had failed and also resulted in substantial depletion of NCOs and experienced soldiers to take up the leadership vacancies in the battalions.  Following the Gallipoli evacuation units once back in Egypt were reorganized in preparation for operations on the Western Front.  Experience in the form of Gallipoli veterans were in very short supply to both train and lead the ‘green’ reinforcements  arriving from New Zealand who were about to be thrust into the Battles of the Somme.

As a result Pte. Harris found himself promptly transferred to the 2nd Wellington Infantry Battalion on the 1st of March, and two days later promoted  to Sergeant!  Four weeks later the 2nd Battalion was embarked onto the Llandovery Castle bound for the New Zealand Admin Depot located within the Expeditionary Force Base Depotat Etaples before being sent into action on the Western Front.

Sgt. Harris managed the responsibilities of his new rank and trench life on the Western Front with little difficulty, however his time in the field was bought to an abrupt end when he was shot in the back and his rear right shoulder during a crucial offensive on the Somme by the Wellington Infantry Regiment on October 1st.

Sgt. Harris’s wounds were severe.  He was immediately evacuated to the General Hospital at Camiers on the French coast north of Etaples to have the wounds stabilized and then was moved to No 4 General Military Hospital at the Etaples Military Hospital Complex.  It was soon apparent the severity of his wounds were non-survivable and on 12 November 1916 Sgt. ‘Mick’ Harris, cycle mechanic and hockey champion from Inglewood, succumbed to his wounds and died at age 26 years 7 months.  He is buried in the Etaples Military Cemetery, Pas-de-Calais, France.

Footnote:  Mick Harris’s younger brother James also served: 11870 Corporal James David Harris, “B” Coy, Wellington Infantry Battalion – 12th Reinforcements.  James embarked in May 1916 and landed in France in August.  In June 1917 he was gassed and then in July 1917 was severely wounded by a gun shot wound which penetrated his chest.  As a result James was returned to NZ being “no longer physically fit for war service on account of wounds received in action”.  Cpl. James Harris spent a total of  1 year 248 days overseas for which he was awarded the British War Medal and Victory Medal.  He died in Palmerston North in 1956.

In January 2015 I received the following email from Jaci of Whangamata:

“We are trying to locate two medals 1914-15 Star and Victory Medal awarded to my husband’s Great Uncle Ernest Joshua HARRIS. The third medal – British War Medal – is in the hands of a relative.

On a Google search I discovered that on 27 January 2013 an advertisement was placed on Trade Me for a WW1 Victory Medal named to 10/881 Sjt E J Harris.  Ernest Joshua Harris, Well Inf Regt, Main Body. D of W- France 12/11/16.  I have been unable as yet to discover who placed this advertisement and whether the medal was sold or not. We would appreciate it if you could pass this information on to your contacts in the hope that they may be able to get a result.”

I contacted Jaci who told also that apart from the relative who had the British War Medal, the family were also in possession of Sjt Harris’s Memorial (‘Death’) Plaque & Scroll and King’s Message.  The medals had not been seen for decades and could possibly have been distributed among various families after Margaret Harris died in 1944?  This was a common practice of the time – keeping medals together was of no particular significance at that time.  I suggested to Jaci that from experience missing medals were most often found in the hands of wider family members, or even sometimes had been disposed of/sold by the members – she should re-contact all known family and ask if any could help with their quest?  At the same time I placed Jaci’s request for Sjt. Harris’s two missing medals – 1914/15 Star and Victory Medal – on the Missing In Action page of the Medals Reunited New Zealand website.

I then made inquiries from my all of my contacts after dissecting possible medal sales trails on Trade Me, as well as checking eBay and major medal auctions since 2013, but without much luck. So it was know down to a possible response from the request on the medals MIA page on this website.

I had had no information forthcoming from the MIA post by the time I next heard from Jaci in October 2016 when she emailed me again:

“ …… I received some info today from a family member who may have one of the missing medals – presumably the 1914-15 Star. Awaiting  confirmation.

Six hours later I received another email from Jaci:

“ … I wish there was some way of finding out the purchaser of the Victory Medal.  Good news.  Have only just received confirmation that the 1914-15 Star is indeed in the hands of a family member so you will now be able to update your website.

Keep up the good work.

Since then I had heard nothing further from either Jaci or in response to the medal MIA request (only for the Victory Medal now) until January 2017 when out of the blue at about 10.30 pm one evening I received the following Facebook message on my phone:

Hi,
“…. I used to own his Victory Medal but on sold it and haven’t got a clue where it is now, I took a photo of it and posted on his (Sjt. E.J. Harris) Auckland cenotaph profile.

sent from my iPhone

I immediately responded – Rangi said he had seen the missing medal request on my website.  As he had sold the medal on Trade-me I asked him if he could remember who had bought the medal – was it someone local and/or could he remember a name so that I might have a chance to possibly trace it?

“I’ll try and track the buyer down – that’s great to hear the family has got most of his entitlement back. I’m an amateur historian … … I have seen his name on the Inglewood Cenotaph …”

On 30 January 2017 Rangi responded to one of my requests for progress in locating the medal:

“Yes Ian, I have his Victory Medal back in my possession and would be honoured to return it to his whanau.”

When asked, Rangi also said there would be no cost for recovering the medal from the current owner (presumably Rangi had to buy it back), he was just happy to see it reunited with the family.  I contacted Jaci and husband Brian with the news and to put them in contact with Rangi to arrange the return of the medal.

Jaci phoned me last Thursday to tell me they had received the Victory Medal from Rangi – at last Sjt. E. J. Harris’s WW1 medal Trio was once more in the hands of his descendant family after being separated for some 48 years !

….. which all goes to prove that missing medal requests posted on our Missing In Action webpage can produce positive results provided you are prepared to wait – even for 25 months.

My thanks to Rangi T. (a former 2/1 Battalion returned veteran) for responding to the missing medal request and going the extra mile to recover the medal for Jaci’s husband.

The reunited medal tally is now 99. 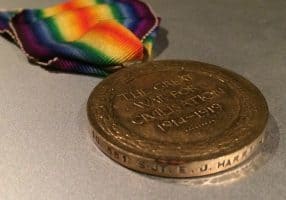 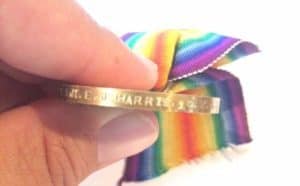