Four weeks ago I received a request from the NZ Police in Auckland for help to return a medal that had been found by a woman and her daughter who were taking exercise during the COVID-19 Level Four ‘Lockdown’ in May this year.  Police Sgt. Mike Nolan from the Waitakeri Station contacted me for assistance to identify the recipient of a New Zealand Prison Service Medal for Long Service and Good Conduct, whose initials and name were stamped on the edge: EW Simon.  Mike was keen to see the medal returned to the family, if at all possible.

Chasing the origins of the owner of a medal in New Zealand that has only initials and a surname is not easy.  The fact that it was a Prison Service Medal (instituted in 1981) made the search that much harder because there are no publicly available medal rolls of the recipients.  In fact there is very little written about the medal on the internet, except a copy of the Royal Warrant when it was eventually recognised as an official award.

On September 28, 1901 the NZ Government approved the institution of a Long Service Medal for the NZ Prison Service of the Justice Department,* to be awarded on the same terms as NZ Police Officers, that is, the completion of 14 year continuous service in Prisons, provided the officer had not made an appearance in the Defaulters Book.  For indiscretions considered serious, in addition to any fine, an officer could forfeit the right to wear the medal and the medal itself could be forfeited, or the officer could be suspended from wearing the medal for a specified period of time.

The original medal used was the same Long Service and Good Conduct Medal that was issued to New Zealand military personnel from 1886-1917.  In 1974, the wording on the Reverse of the medal was altered from “LONG SERVICE AND GOOD CONDUCT” to “NZ POLICE” and introduced the following year under Royal Warrant.  A certificate to accompany the medal was introduced in June 1974. However, it is also noteworthy that no register of recipients was maintained, again underlining the medal’s lack of a recognised status among New Zealand’s official medals and the Order of Wear.

Note:  * Re-titled the Department of Corrections from 1995.

The medal has had a chequered history of qualifying service required for the award.  The initial period of 14 years was reduced from to 10 years in 1924, then increase to 20 years in 1934, and again reverting to 14 years in 1953, the same year Clasps were introduced for each 8 years of additional service.  This service too was subsequently reduced to 7 years in the mid-1960s. 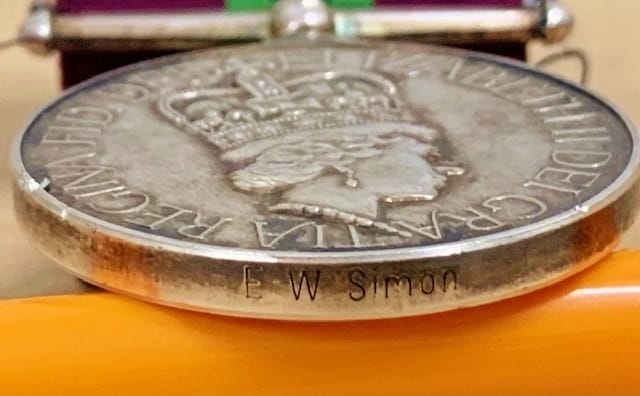 Because the medal at this time was not issued under Royal Warrant, there were restrictions on when it could be worn with uniform – the medal essentially had the status of a memento for Prison Officers, having no place with official medals.  In the mid-1950s, the option to formalise the award under a Royal Warrant was not pursued, however the medal had started to make an internally sanctioned appearance on uniforms, on the right side of the chest.

In 1976 the validity of the medal used to recognise long service for Prison Officers was again, this time by the government.  As a consequence, all awards were ceased in June 1976 and no further issues made. 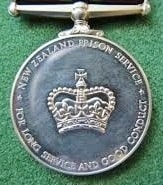 A new medal entitled the New Zealand Prison Service Medal was instituted under its own Royal Warrant on 15 October 1981.  Qualifying service was set at 14 years continuous service completed on or after 1 January 1976.  As an official medal, it is worn by recipients only on the LEFT chest.  The relatives of a deceased recipient may wear their medals on the RIGHT chest, on appropriate occasions.

It was not uncommon in the past to see longer serving Prison Officers wearing both the former Long Service and Good Conduct Medal (1901-1976) awarded to the NZ Police, and the New Zealand Prison Service Medal (1981).

The medal may be awarded to any full-time member of the New Zealand Prison Service who has completed a total of 14 years continuous service, in a custodial or supervisory capacity, and whose character and conduct is, in the opinion of the Secretary for Justice, of such good standard to warrant the Medal.     Reference: The New Zealand Police Medal by John D. Wills, 1990.

With no written reference material re medal recipients to consult, I first approached a long serving Prison Officer and former Army colleague I had known since we joined the Army together as Regular Force Cadets at Waiouru in 1970.  Rakai Tawhiwhirangi (‘Whiwhi’ for short) would know for sure who and where this former Prison Officer could be found.  My text message was answered in a flash with a name: Eddie (Edward) Simon – sadly he had passed away some years ago however Whiwhi’s information also included a contact number of one of his friends, another former prison officer who had worked directly with Eddie Simon. Excellent!

Adrian Firmin is a long serving officer and former soldier.  As I soon discovered Adrian was a mine of information of both military and prison service personnel, past and present, and whose power of recall frankly astounded me.  Not only could Adrian relate names, years, places and events, but he had also been close associated with Eddie’s family and so was able to provide me some excellent background and guidance.

Eddie Simon was born in 1950 and grew up in and around Piopio, a small town in the Waitomo District that is situated on State Highway 3 approximately 23 km from Te Kuiti in the King Country.  Following his schooling, Eddie gravitated towards the Whanganui – Rangitikei region where he worked at a number of labouring jobs, eventually settling in Marton where he worked as a truck driver.  It was here in the mid-1970s that Eddie met and later married a formerly married lady, Pare Hinewai June CORKRAN (nee KEREKERE).  June had been living and working in Marton as an Electrical Assembler for some years.  Living alone with her two primary school children, Malcolm Benson and his older sister Maureen Rangi Corkran, Eddie and June teamed up, together with Eddies’s young son Rana from a former relationship.  The family welded together happily with the children growing up together and schooling in both Marton and Whanganui. 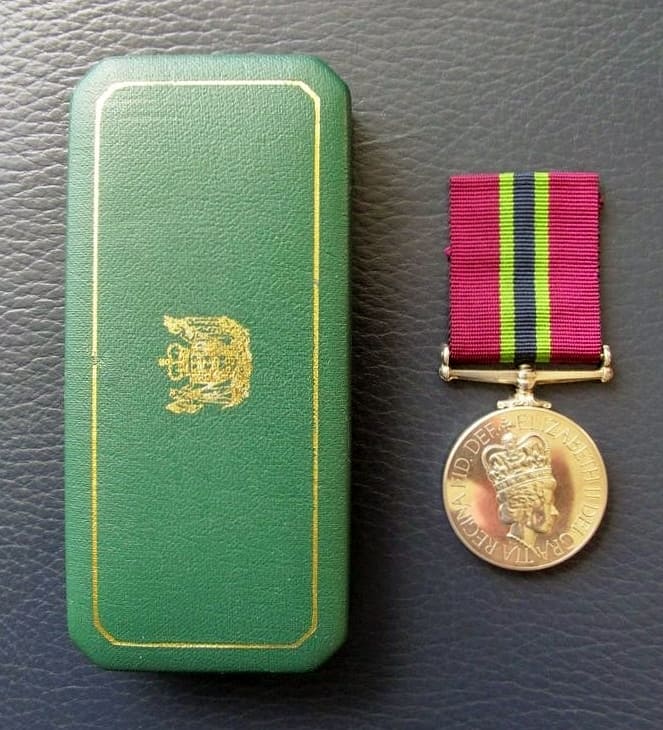 Needing the stability of a steady income and a job with prospects, Eddie entered the New Zealand Prison Service in 1978 at a time when the Kaitoke (Boy’s) Borstal was being modified to become a standard adult men’s prison facility and accordingly additional staff were being recruited.  Once Eddie was accepted for service, the first appointment was at the Whanganui Prison.  He moved his family into staff village at Kaitoke, which is about med-way between Whangaehu and Kaitoke, 4km south-east of Whanagnui City.  It was here also that Eddie gained a reputation for being a fleet-footed and capable rugby player.  He played regularly for Kaitoke and the Whanganui Prison team, representing them in the NZ Prison Officers’ National Championships on a number of occasions.  Eddie also played for the Whanganui Pirates during his time at Kaitoke.  He was later joined by his step-son Malcolm who had also developed into a very handy rugby player while attending secondary school.  Father and son proved to be a formidable pair on rugby field.  After several years at the Whanganui Prison, Eddie was posted to Christchurch Men’s Prison at Paparoa.  From here, Eddie and his family went north again, this time to Upper Hutt where Eddie had taken up a position at the Rimutaka Prison at Trentham.  Eddie completed his service contract at Rimutaka, deciding it was time to make a move and establish himself in a business outside the Prison Service, something that he and June could work on together.

Eddie Simon was awarded the New Zealand Prison Service Medal in 1992.  The medal was awarded on the recommendation of the Secretary of Justice for having served diligently and without blemish for 14  consecutive years.  Eddie was discharged from the Prison Service at the beginning of 1993, he and June remaining in Upper Hutt where they successfully started and ran an owner/driver shuttle bus operation.   Sadly this was to be a short lived venture after Eddie had quite suddenly started to experience severe migraine headaches which on occasion, caused him to blackout.  This problem rendered him unable to drive vehicles.

Eddie (Edward) Wahanui Simon died of a Cerebral Aneurysm on 6 October 1993 at the very early age of 43 years.  Gone way too soon, Eddie was laid to rest in the Akatarawa Cemetery.  Never far from her man, Eddie’s wife June (Pare Hinewai) Simon remained in upper Hutt, passing away 22 years later in 2015, aged 73. 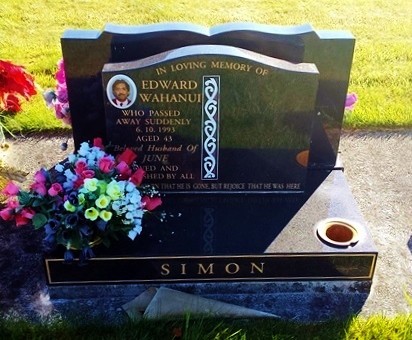 Malcolm Simon, now 54, remains living in Wellington.  His sister Maureen ALDRIDGE lives in Auckland and is a teacher at the Avondale College of Higher Education.  Rana is believed to be somewhere either in New Zealand or Australia.

Having verified the genealogical aspects of Eddie and June Simon’s family, I was pleased to be able to give Sgt. Mike Nolan of the Waitakeri Police, the good news and on a day that all New Zealand Police men and women could have used some good news – Mike and his colleagues from Waitakeri and Henderson were attending the funeral of one of their own, the recently murdered 28 year old Constable Matthew Hunt, at the Mt Eden Stadium – I left Mike a message.

Mike has since been in contact with Malcolm and has arranged for his father’s medal to be delivered to him by his colleagues from the Johnsonville Station who will personally deliver the medal to Malcolm this coming week.

Thanks to Police Sgt. Mike Nolan for contacting MRNZ – glad were able to assist the ‘men in blue’ yet again.  it will make Malcolm’s day when he receives his father’s medal that could so easily have been lost forever had it not been for a sharp eyed Titirangi mum and daughter, and her honesty in handing the medal to the Police.

My thanks to Whiwhi (Rakai) and Adrian without whose initial direction could have seen me up the creek without a paddle looking for Prison Officers past.  John Will’s expertise and depth of knowledge in the field of police and military medals is unsurpassed when it comes finding answers not available to amateurs such as myself – thanks again to John.

The reunited medal tally is now 331.