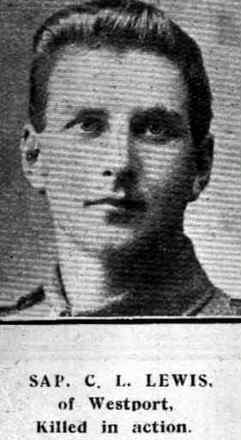 A medal sent to MRNZ on 19 April 2015 has finally found a home.  Finding the descendants of Charles Leslie Lewis has not been easy due to the extinguished lines of the primary members of the family.  The Lewis family was established in the Westport area of the West Coast during the late 1880’s however by the mid 1920s no trace of this family remained, with the exception of headstones in the local cemetery.

Mokihinui is a remote rural area in the Buller region of the West Coast of the South Island, roughly midway between Westport and Karamea.  In January 1895 the family of bushman and mines labourer Charles William LEWIS and his wife Anne Read ATKINSON consisted of just two children.  Annie Lillian Lewis born in 1892, and briefly, a son Robert Fitzgerald Atkinson Lewis in 1894 who died 4 years later in the harsh climate of Waimangaroa, a small village at the foot of the Denniston Mine plateau and the famous Incline.  After Robert’s death Charles, who was working at the Millerton mine as a labourer, decided the promise of warmer climate and a bushman job in the Tasman region was too good to resist and so moved his wife and daughter to the vicinity of Takaka.  It was here their second son Charles Leslie Lewis was born in January 1895.  By 1905 the Lewis’s were back on the Coast after Charles Snr had secured a new position at Mine Creek near the Millerton coal mine, and the family was installed in their new home at 40 Peel Street in Westport.

In 1913, Charles Leslie Lewis’s sister, Annie Lillian Lewis, married Francis Austin NEWMAN, a railway engine fireman.  This left only Charles Jnr at home with his parents.  Charles initially had followed his father into labouring and learning the skills of a bushman however he was soon drawn towards engineering.  As a result of his aptitude and being a quick learner, Charles Jnr was given a job as a junior engineer with the Westport–Stockton Coal Company.

As the old saying goes ‘last on, first off’ and so it was for Charles Lewis.  The First World War which was consuming most New Zealanders every waking hour, had moved from the disaster and catastrophic loss of life that was Gallipoli, to the Western Front.  Back home, reinforcement drafts of young and able men were being drawn together from all regions around the country to replace the large numbers of New Zealanders who had been killed and wounded.  When Charles Leslie Lewis was ‘called to the colours’ he counted on his basic military experience with the Westport based 8th Garrison Artillery Regiment however, his engineering background meant he was assigned to the NZ Engineers.  By April 1916, 20 year old 4/2097 Sapper Charles Leslie Lewis was on his way to England with the 11th Reinforcements aboard Her Majesty’s NZ Troopship No.50 (HMNZT 50) Tahiti.

Charles’s mother Anne was thoroughly distraught at his leaving.  A rather frail woman at the best of times, Anne who had already lost one son, fretted for her remaining pride and joy which doubtlessly contributed to her death the following year.  If Spr. Lewis believed in omens, aside from dealing with his own grief over the loss of his mother , her death must also have given him grave concerns over his own mortality given the circumstances he was in. 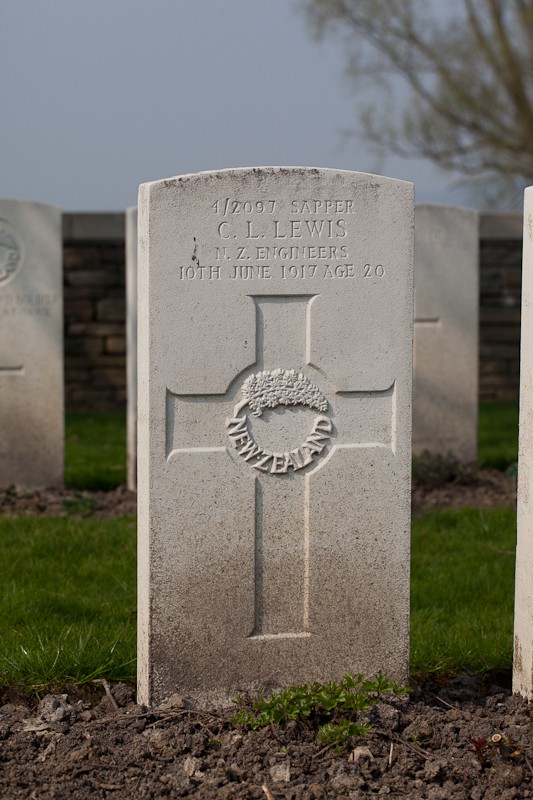 Spr. Lewis had been in France with the 2nd Field Company, NZ Field Engineers since December 1916 and was now on the front line of the battlefield.  He had been involved in all manner of field engineering tasks as well as infantry work, on the front line as well as a period of attachment to an Australian Tunneling Company, no doubt to assist with digging saps, trenches and making repairs to same that had been impacted by artillery fire.  In June 1917 Charles was part of a major offensive that saw the New Zealand Division push into Belgian territory – the Battle of Messines commenced on the June 7th.

Three days into the seven day battle, 21 year old Spr. Lewis’s battlefield experience ceased abruptly.  He was Killed In Action on the 10th of June during a hideously punishing enemy fusilade of artillery bombardment that resulted in Charles having to be temporarily buried.  There was no opportunity for a funeral service.  Spr. Lewis’s file states he was “buried 100 yards north of hedge, just north of Messines, reported at Wytschaete”, a nearby village.

Charles’s father, Charles William Lewis, as tough and hardened as he was through his upbringing on the Coast and subsequent labouring jobs at the mines and in the bush, was a broken man.  His only daughter Annie and her family had left Westport in 1914 for Koupokonui in South Taranaki to join her husband Francis who was with the railways, too far to away to keep up any regular contact.  Not only had he lost an infant son, but his wife, and now his only remaining son were also gone.  Charles Lewis Snr left the Coast and drifted up to Mangapapa in Poverty Bay where he laboured until securing longer term work as a farmer.

In attempting to find the descendants of Charles Leslie Lewis my attention turned to the only initial survivor of the family,  Charles’s sister Annie Lillian NEWMAN.  Annie had married Francis Newman in 1913 and they had had only two children, a son and daughter – Leslie Austin Newman and Alice Joyce Newman.  I first followed the records of Leslie and his wife Noeline Newman’s family only to discover that their only child, a son Graham, had died in 2002 (leaving a wife and two daughters).

Ideally I wanted to find someone in the Lewis family of Graham’s generation to pass the medal on to, before I considered a younger generation.  Leslie Lewis’s sister was Alice Joyce Lewis.  Alice had married Keith George BLAIR, a grocer as was his father before him. I followed Keith Blair’s pre-marital movements which took me to Gisborne and whilst checking the pre-1935 records discovered both Alice Joyce LEWIS and Charles William LEWIS were living at the same address as Keith.  As was confirmed to me later, Alice had apparently had left her home in Wanganui looking for her grandfather in Poverty Bay.  Once found, Alice stayed with and cared for an aging Charles Snr.  It was during this time that she met and married Keith Blair.

Charles Snr passed away in Rotorua in 1945 and the Blairs then relocated to Keith’s family home in Miramar, Wellington.  As luck would have it the Electoral Roll records from 1935–1981 showed that a large number of the Blairs (which included Keith’s parents and siblings) had remained in the same suburb until the records terminated in 1981.  Noting the Blairs had had a daughter and two sons, I concluded that since they appeared to be a non-transient family over all those years, there was a good chance there may still be a Blair on the Miramar Peninsula and so checked the white pages.  I phoned the one and only Blair listed in the phone book as being resident in the area.  Good fortune was with me when I connected with Joyce and Keith’s first born son, Bruce George BLAIR who was living barely a stones throw from his old family home in Cavendish Square.

When I had told Charlie Lamb of my findings he was very keen to have the opportunity to personally hand over Spr. Lewis’s Victory Medal.  When Charlie sent me the medal it had been minus the ribbon.  Charlie has offered to have the medal prepared for wearing at his own expense, complete with ribbon and brooch bar so that the medal could be worn on the forthcoming Anzac Day.

The medal is now on its way back to Charlie who will make the journey from Auckland to Napier where he will meet up with Bruce Blair and his Napier resident brother Neil, next Monday.  The brothers will also be joined by some other Blair family members that are travelling to Napier especially for the medal handover.  Well done Charlie – for saving the Sapper Charles Leslie Lewis’s medal in the first instance, and for restoring it before handover to the family – a wonderful gesture from a very grateful family.

If only we could find the British War Medal and Memorial Plaque that had been sent to Spr. Charles Lewis’s grieving father….?

The reunited medal tally is now 107. 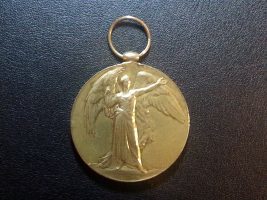 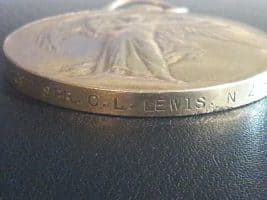 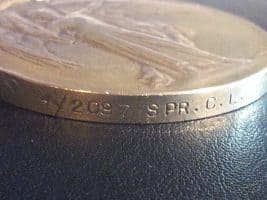 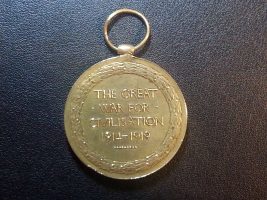