In November 2016 I received the following message on the MRNZ Contact Form:

Medal was with my Mums things for Years. I always thought it belonged
to her 1st Hubby killed in World War 2. His name J A Walsh RAF. This
Medal 1914-1918 with a Horse on it has the No 10/459 PTE BH Monk.
Didn’t even know they had names & numbers until my Grandaughter just
read it out one day. I am almost 70 so my Mum had it all those years,
I don’t know of any connection at all. When I hear back from you I
will send same. Thanks T…. Joseph, Auckland

I replied and Ms Joseph advised me of the medal recipient’s name and forwarded me the medal which duly arrived complete with a red, white & blue ribbon (incorrect) attached to the medal.  The medal was otherwise in very good condition and correctly impressed (named) around its edge.

Starting with the AWM Cenotaph and Ancestry information, I discovered that Kaikoura-Kekerengu had been home to the Monk and Connor families from the mid 1850s.  George Herbert MONK, a farmer, and Margaret Theresa CONNOR had wed and relocated to Ranana on the Wanganui River in the late 1880s to break in land for their own farm.  The couple had five sons – Ernest Herbert Horace, George Francis, Gifford Nott, Bernard Herbert, Lawrence Richard and lastly a daughter, Nena Theresa – were all born at Ranana (now Pipiriki) between 1888 and 1902.

George and Bernard Monk had been members of the Wanganui Volunteer Rifles in the years before 1914 and were among the first volunteers to be called up to fight the ‘Hun’ as WW1 unfolded.

10/459 Pte. Bernard Herbert MONK and his older brother, 10/458 PTE George Francis Monk, both  farmers on their father’s land, joined the first of many Wellington Infantry Battalions, their battalion being part of the Main Body of the New Zealand Expeditionary Force (NZEF).  Embarking for England in October 1915 they soon discovered they were bound not for England but the Suez Canal and Egypt.  After a 50 day voyage they arrived at the Port of Alexandria and entrained for Zeitoun, the location of the NZ training camp.  The Wellington Battalion was to form part of a multi-national force to help combat a threat manifested by the Turkish nation in the Dardenelles and on the Gallipoli Peninsular.

25th April 1915 (we now know as ‘Anzac Day’) is familiar to us all – for both Monk brothers it was to be their ‘baptism by fire’ …  but not for very long.  On May 7th, Pte. Bernard Monk was within days of his 22nd birthday when he and George both set foot on the Gallipoli Peninsula during the Landings.  Just 12 days later Bernard was killed outright, his death being later commemorated where he is now buried, on the Twelve Tree Copse (New Zealand) Memorial, Twelve Tree Copse Cemetery, Helles, Turkey.

Brother George fared slightly better only in that he did not lose his life.  George was wounded in the right shoulder on 15 August 2015 and as a result was captured by the Turks and taken to Afion Kara Hissar.  He was interned by the Turks as a Prisoner of War for the next 3 years and 3 months.  Pte. George Monk was repatriated to the NZEF immediately after the Armistice in November 1918 and returned to New Zealand in late January 1919, after 4 years and 104 days overseas war service.

Oddly enough it was to be George’s descendant family lineage that enabled me to trace and locate a direct descendant in New Plymouth.  George and his wife Ellen Grace (Nell) SCULLY had had two children, Sylvia June (d: 2004) and Bernard Bruce (Bernie) Monk.  Of Bernard Bruce and wife Marion Ruth’s two sons Bruce William and Winston George, it was Winston’s family that through the White Pages led me to his home location in rural New Plymouth.  Sadly Winston passed away in 2006 however I spoke with wife Karen Fergusson-Monk who was able to tell me that Winston’s dad, Bernie Monk, was still hale and hearty at 94 years of age and would be delighted to receive the medal.

I will post the medal to Karen tomorrow. Karen has indicated that to ensure the medal remains within the Monk Family the long term custody of it will likely be entrusted to Bernie’s grandson. Nicholas Bernard Monk – Karen and Winston’s son and great-grand nephew of the late 10/459 Private Bernard Herbert Monk.

No doubt we will continue to wonder whether the medal that remained in Mrs Walsh’s personal effects for so many years had been something that she simply found, or perhaps there was another significance resulting from a connection of some fashion between her and Bernard Monk … the medal could have been a memento from Bernard’s family or a relative to this young lady as a token of remembrance for a lost friendship, or even love …. not an unknown practice in light of the huge losses of life incurred during the First World War … a question that shall probably never be answered ?

My thanks to Ms Joseph for sending MRNZ the medal.

The reunited medal tally is now 88. 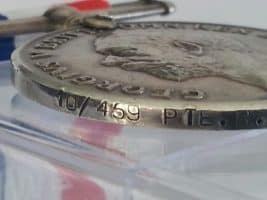 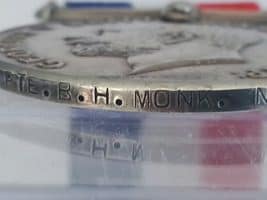