It is rare that a family is reunited with their ancestors war medals from three different sources at the same time but this situation resulted in a very welcome New Year present for one family in Halswell, Christchurch this week.

Earlier last year I followed up a number of RSA Review LOST TRAILS posts regarding war medals that had been found with their finders seeking families to return them to.

As a result of my contacting these finders I received a request for assistance from Ian and Jane L. of Nelson in May 2015 who had posted a find of WW1 medals awarded to three separate soldiers.  Ian and Jane had inherited a collection of military memorabilia from Ian’s father and grandfather which included incomplete medal groups awarded to the three soldiers, and who had no known connection to their family.  By their own efforts Ian and Jane had successfully returned the medals of 2/1769 Pte. John DODS of Opotiki to his descendant family.  However no such success with the other two names and so passed the medals on to me to research.   One of these medals was a 1914/15 Star accompanied by an engraved Returned Soldiers Badge awarded to 10/570 Pte. Alfred Udy MILLARD.

Alfred Udy Millard was the eldest of five siblings born at Kaiapoi to Alfred & Isabella, nee Stokes. Alfred’s father, Alfred Millard Snr, had had a distinguished military career as a soldier in the Queen’s Guards serving in the Crimean War and the Indian Mutiny. He had emigrated to New Zealand in 1862 to the West Coast gold fields, later becoming a commercial traveler and marrying Isabella Tourell of Kaiapoi.

Alfred Udy Millard worked as a farm labourer and then a cook up until he enlisted in the Wellington Infantry Regiment in 1914.  He embarked as part of the Main Body in May 1915 for Egypt and Gallipoli.  Alfred was severely wounded at Gallipoli in May 1915 with a gunshot wound to his head and knee.  He was invalided to England to recover where he remained working as a cook in the NZ Brigade lines, only to contract Tuberculosis in 1918.  As a result he was discharged in March 1919 and returned to NZ.  Here he recovered and went back to itinerant cooking jobs around the North Island east coast and Auckland until he retired.  Alfred was awarded the 1914/15 Star, British War Medals and Victory Medal for his service.

Alfred is remembered as being of the strong, serious, silent type who stood no nonsense and who was obviously affected by his wounds and war experiences. He never married and remained a loner who kept sporadically in touch with his only sister, Bertha Edwards.  Alfred Udy Millard died a pensioner living alone at Riverhead, Rodney in 1948 aged 74 years and is buried in the Waikumete Cemetery (Soldiers Section).

My initial research to find Alfred’s descendants was partially aided by the start Ian and Jane had made.  An Ancestry family tree posted by Sue K., an Edwards family friend and historian, gave me the lead I needed to research electoral rolls and establish the Millard/Edwards lineage which eventually put me in touch with Alfred’s great-niece Julie Edwards of Rakaia.  Julie in turn confirmed that her father Paul of Halswell, Christchurch was indeed the son of Alfred’s sister Bertha and James Edwards, and nearest living relative in New Zealand.

During my research another fortunate turn of events occurred in August 2015 when Jane received an email from Gwyn R. of Motueka, a medal collector with a particular interest in medals awarded to New Zealanders. Gwyn had seen Jane’s Lost Trail advert in the RSA Review and coincidentally was in possession of Alfred Millard’s British War Medal & Victory Medal which he had acquired for his collection.  The BWM had been purchased in the 1990s from a dealer in Auckland, and the VM from a UK trader in 2012.   Gwyn very kindly offered to reunite Alfred’s medal pair with the 1914/15 Star I was holding on behalf of Ian and Jane, provided a descendant could be found.

On Saturday, 09 January 2016 all ‘ducks had been aligned’ and I had the pleasure of travelling to Christchurch and handing Pte. Alfred Udy Millard’s reunited trio of medals plus his Returned Soldiers Badge to Paul, Val and Julie Edwards.  In addition, and since Alfred had died in 1948, I was able to advise Paul that he was entitled to apply for Alfred’s unclaimed Gallipoli Medallion and Lapel Badge which were awarded (upon application) in 1967 to all surviving Gallipoli veterans (or their families) to commemorate the 50th Anniversary of the Gallipoli Landings.  Julie is now pursuing this claim.

I will now turn my attention to the remaining medal that Ian and Jane found named to 73359 Pte. Angus McLEAN (known as Angus GALBRAITH) of Shannon, Wellington Infantry Regiment, 37th Reinforcements.

My grateful thanks to Ian and Jane L. for entrusting MRNZ with their medals and research, to our part time researcher Julie C. for her contribution, and in particular to Gwyn R. for his most generous offer to add his Millard medals to the 1914/15 Star which allowed the reunited medal trio of 10/570 Private Alfred Udy Millard to be returned to his family.

The reunited medals tally is now 35. 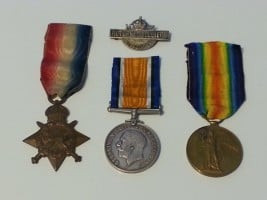 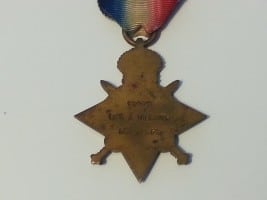 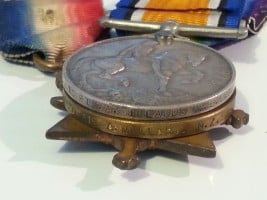 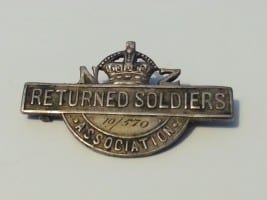