A former Army colleague contacted me last month after seeing Medals Reunited NZ on Facebook. Some years ago Ken (Blue) H. had seen two sets of WW1 medals on Trademe and as he did not like the idea of them being traded, purchased them for safekeeping.  After seeing the MRNZ website Blue sent the medals to me to to see if we could reunite them with family or descendants. One of the sets of medals was a British War Medal and Victory medals named to New Zealand Engineer, 61045 CPL. I. A. C. CORBITT N.Z.E.F.

61045 Corporal Isaac Albert Carter CORBITT was one of four children of John and Elizabeth Corbitt, born and bred in Ashburton.  Isaac Corbitt was a 29 year old coach-builder and running his own coach-building business at the time he was called up for war service with the New Zealand Engineers, 36th Reinforcements, during the last year of the war.  Prior to the war, Isaac had also worked as a blacksmith and served for three years in the Ashburton Rifles.

Sapper Isaac Corbitt NZE departed for England from Wellington on 24 April 1918, and eventually on to the battlefields of France.  Corporal Corbitt was fortunate enough to return home unscathed in October 1919 and picked up where he left off, coach-building in Tinwald. The year 1919 also saw Isaac marry Violet Dinah May (May) COX in Ashburton where they resided for the rest of their lives; they did not have children. During the late 1920s Isaac left the coach-building industry to become a storeman, a job he held until becoming a steward upon his retirement in the 1960s.

Isaac Albert Carter Corbitt died in Christchurch in June 1974 at 86 years of age. 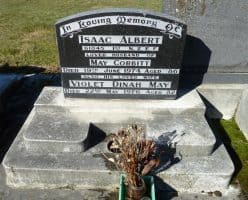 My search for Cpl. Corbitt’s ancestors started with the Ancestry and BDM records.  I discovered the Corbitt families had been largely localised in the South Canterbury region (Ashburton/Waimate) since the late 1890s.  With only two ‘Corbitt’ entries in the White Pages it was soon apparent that few family members still survived and so I resorted to working through the family trees on Ancestry that carried the Corbitt name.  Fortunately the unique spelling of Corbitt narrowed the field and as a result, I was contacted by two of the authors, both resident in Australia.  The first was able to advise me that a Gregory Thomas CORBITT (chef/baker formerly of the Sweet-Art Cake Company in Christchurch) was the grandson of his sister Harriet (Walker) and a great nephew of Isaac.  Gregory was traceable until 2009 but all attempts to locate him since that time drew a blank.

The second tree author was Raelene S. from North Ipswich, Queensland and her reply was very positive – Isaac had been her great uncle.  Raelene was able to advise me that she was also in contact with the last of Isaac’s nieces, her Aunt – Ruth Elizabeth Corbitt of Timaru.  Ruth is now 90 years old and sadly has dementia however Raelene was able to confirm through Ruth’s son Grant, that she (Raelene) be the custodian of the medals on behalf of the Corbitt family.  Cpl. Isaac Corbitt’s medals are now en route to a delighted Raelene in Australia.

Many thanks to Blue for preserving the Corbitt medals and passing them on to us – we will now work on the second set of medals Blue sent us.

The reunited medal tally is now 43. 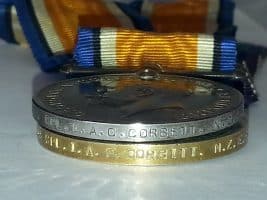 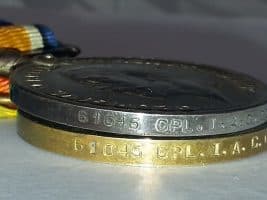